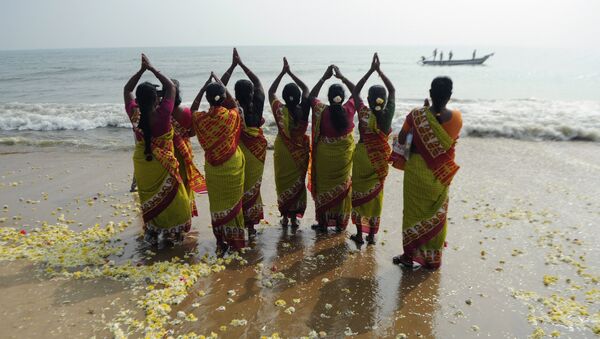 © AFP 2021 / ARUN SANKAR
Subscribe
India is set to step up efforts to harness mineral wealth from the seabed of the Indian Ocean with the government soon to launch a $1.5-billion deep ocean mission. The proposed mission aims to rein in energy, food, medicine and other natural resources that surround the Indian peninsula.

India Launches Third Resource Monitoring Satellite for Commercial Use
New Delhi (Sputnik) — The major components of the project have been said to be deep ocean energy, desalination plant along the Chennai coast, deep sea science and fisheries, minerals and polymetallic nodules.

India needs vital minerals such as copper, cobalt, nickel and manganese for future generation manufacturing including the production of hybrid cars, and smartphones. Currently, China has a monopoly over such minerals. Indian scientists estimate 380 million tons of polymetallic nodules in the retained Indian Pioneer area.

India's National Institute of Ocean Technology has been working on a mining concept where a crawler-based mining machine collects, crushes and pumps nodules to the mother ship using a positive displacement pump through a flexible riser system.

India’s Largest IT Services Firm Sets Up Lab to Develop Drones in the US
"A deep-sea research center is coming up. We are going to launch an inter-disciplinary and inter-ministerial Deep Ocean Mission. The Ministry of Earth Sciences is preparing a proposal that will be put before the Cabinet for approval," Madhavan Nair Rajeevan, Secretary of India's Ministry of Earth Sciences, said.

Last year, India signed a 15-year contract with the International Seabed Authority (ISA) for exploration of Poly-Metallic Sulphides in the Indian Ocean. It is expected that basic exploration activities would require no more than $100 million.

India has a 7,500-km coastline and 2.4 million square kilometers of Exclusive Economic Zone.