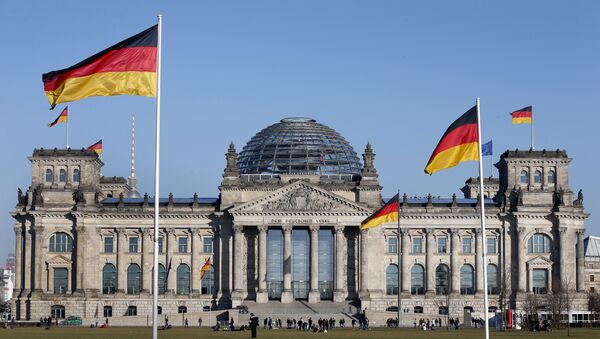 © AP Photo / Michael Sohn
Subscribe
The German interior ministry has confirmed it has received more than 400 applications for asylum from Turkish citizens living in Germany, including NATO staff, diplomats and other government officials and their families in a sign of continuing tensions between Ankara and the EU.

Turkey Accuses Germany of Aiding Its Enemies
Turkish President Recep Tayyip Erdogan has faced criticism for his crackdown on opposition forces and the media — particularly since the failed coup of July 2016, which he blamed on exiled cleric Fethullah Gulen, now living in the US.

Thousands of government officials, teachers, military, police and journalists believed to be Gulen sympathizers have been rounded up and detained in Turkey.

Erdogan was given sweeping new presidential powers following a referendum April 16, which saw the office of prime minister abolished and extra powers given to the presidency. 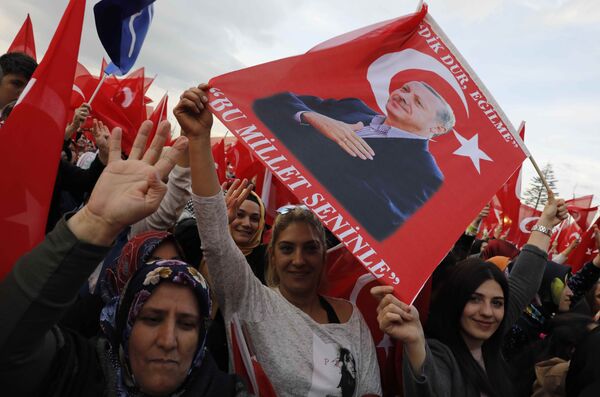 Supporters of Turkish President Tayyip Erdogan wave national flags as they wait for his arrival at the Presidential Palace in Ankara, Turkey, April 17, 2017.
© REUTERS / Umit Bektas

Relations between Ankara and EU members have been under strain in recent years — particularly over Turkish accession to the EU, which was conditional on the EU-Turkey migrant deal, under which "irregular migrants" would be returned to Turkey from Greece.

Many NGOs — including the United Nations Refugee Agency UNHCR — condemned the move as they believed Turkey was not a "safe third country" under the Geneva Convention.

German-Turkish links were tested by the arrest, February 27, of Deniz Yucel, a German-Turkish journalist working for Die Welt newspaper.

He was arrested and detained on charges of supporting a terrorist organization and inciting public violence.

Berlin, Ankara Clash Over Arrests in Turkey and Rally Cancellation in Germany
The situation worsened when German authorities banned pro-Erdogan demonstrations in Germany in the run-up to the referendum. Germany has a significant Turkish population which Erdogan was keen to ensure voted in favor of the controversial referendum.

Both Germany and Turkey are NATO members, with the alliance making much use of Turkish assets for its Middle East operations — particularly the airbase at Incirlik in southern Turkey.

The granting of asylum to NATO staff and their families is likely to cause diplomatic tensions between Berlin and Ankara.