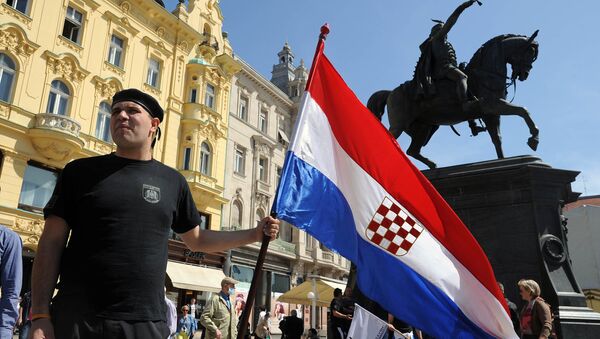 © AFP 2021 / STR
Subscribe
April 22 is traditionally marked in Serbia as Remembrance Day for the victims of Jasenovac – a notorious Ustashe death camp in the Nazi-allied Independent State of Croatia where an estimated 700,000 Serbian, Roma, Jewish, Croatian, Bosnian and Slovenian civilians were killed during WWII.

Expulsion of Serbs Undermines Croatia's Attempt to Absolve Its Own WWII Crimes
Unfortunately, this sad date is not officially marked in Croatia, which still refuses to unequivocally condemn the crimes of the not so distant past.

In a sign of the strong divisions existing in this former Yugoslav republic on this sensitive issue, the local Association of Jewish Communities, the Serbian National Convention and the Anti-Fascist League boycotted official commemorations organized by the government, which failed to remove a plaque installed last year and bearing a World War II Croatian pro-Nazi salute from the site of the camp.

The “Za Dom Spremni!” (“For the Homeland — Ready!”) salute was used by WWII Croatian fascist troops. It was inscribed on the plaque in Jasenovac honoring Croatian fighters killed in the 1990s.

In an interview with Sputnik Serbia, the chairman of the Croatian Helsinki Group, Zarko Puhovski, complained about the authorities’ “diplomatic” response to attempts to whitewash the crimes committed by Croatian fascists.

Efraim Zuroff, director of the Jerusalem branch of the Simon Wiesenthal Center told Sputnik that “Jasenovac — the Truth” film directed by Jakov Sedlar, which offers a “more balanced” view of the crimes committed by the Ustashe regime, had earlier been nominated for a prestigious award in Zagreb.

In a letter to the Croatian parliament, the Simon Wiesenthal Center said that the film was an attempt to downplay the crimes committed by the Ustashe regime.

Israel Observing Holocaust Remembrance Day
“The film purports that Jasenovac was just a labor camp, it denies the Holocaust and the genocide and downsizes the number of the people who perished there,” the letter said.

“Moreover for some strange reason the authors blame the Communists for turning this ‘labor camp’ into a death camp where they were allegedly killing Croats, not the other way round,” it added.

This attempt to rewrite history invited angry backlash also from the local Jewish and Serbian organizations.

“The mere fact that Croatia is not marking Remembrance Day for the victims of Jasenovac on a national scale means that the government simply has no guts to look the problem of Ustashe crimes in the face,” Efraim Zuroff emphasized.

The so-called Independent State of Croatia (NDH), a fascist puppet state established in 1941, murdered and persecuted Jews, Roma, Serbs and Croats opposed to the regime.

The most notorious concentration camp was Jasenovac in central Croatia, where according to varying estimates, between 83,000 and 700,000 Serbs, Roma and Jews were murdered between 1941 and 1945.