The Red Line of Common Sense: The US Can't Control Russian Ports Without War 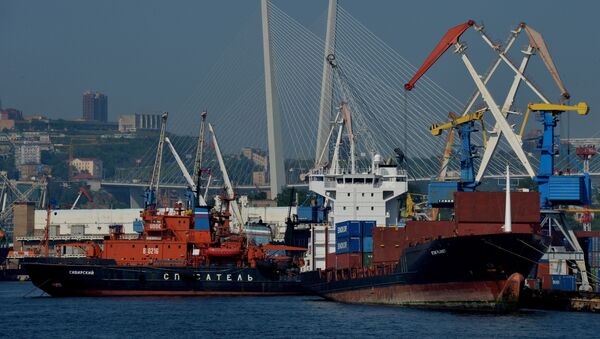 Moscow lashed out at a US Congress bill on tightening sanctions against North Korea which stipulates that the US military may establish control over ports in the Russian Far East. The Russian Upper House warned that such actions violate international law and amount to a declaration of war.

US House Passes Bill Authorizing Toughest Sanctions Against North Korea
On May 4, the US House of Representatives passed a bill which slapped more sanctions on North Korea and gave the Trump administration the go-ahead to take control over Russian, Iranian, Syrian and Chinese ports in order to ensure that no forbidden cargo reaches Pyongyang.

In particular, the bill mentions the ports of Nakhodka, Vanino and Vladivostok in the Russian Far East.

The bill, which was approved by a 419 to 1 margin, is due to be approved by the Senate and then signed by US President Donald Trump.

Konstantin Kosachev, chairman of the Russian Upper House's International Affairs Committee, told Sputnik that the US House of Representatives bill on establishing control over ports in the Russian Far East envisions a show of force and thus amounts to a declaration of war.

"This bill, I hope, will never be implemented because its implementation envisions a scenario of power with forced inspections of all vessels by US warships. Such a power scenario is beyond comprehension, because it means a declaration of war," Kosachev said.

According to him, the document, "like a huge number of other pies baked by Congress," runs counters to international law.

"No country in the world and no international organization, primarily the UN, has authorized the US to monitor the implementation of any resolutions of the UN Security Council," he said.

Armageddon in the Making? US, N Korea Dig In Heels on Pyongyang's Missiles
Kosachev called the bill Washington's attempt to "affirm the supremacy of its own legislation over international law," which he said is "the main problem of present-day international relations."

He was echoed by Alexey Pushkov, a member of the Russian Upper House, who specifically drew attention to the fact that the bill' final vote was 419 to 1, something that Pushkov said "indicates the nature of the legal and political culture of the US Congress."

"It is absolutely unclear how the bill will be implemented. To control Russian ports, the US will have to introduce a blockade and inspect all ships, which amounts to an act of war," he pointed out.

He shared Kosachev's view that Washington is trying to extend its legislation to other countries.

"But there is already a red line related to a common sense," Pushkov said, referring to the bill which he said will almost sure be adopted.

Andrey Krasov, first deputy head of the Russian Lower House's Defense Committee, in turn, told Sputnik that US control of the Russian Far Eastern ports is out of line with a general concept on maintaining international security.

Mind Your Own Business, Stay Away From Russian Ports - Moscow on US Bill
He expressed confidence that no American ship will enter Russian territorial waters.

"Why on Earth did America assume the responsibilities, who gave it such powers to control the seaports of our country? Neither Russia nor international organizations asked Washington to do so," he said.

"One can only answer that any unfriendly step by the US Administration against Russia and our allies will receive a symmetrical adequate response. In any case, no American ship will enter our waters. Our armed forces and our fleet have every means to severely punish those who will dare to enter our territorial waters," Krasov said.

He described Washington's position on the matter as nothing but "saber-rattling."

"With a unipolar world already in place, they should accept the fact that there are BRICS countries, including Russia, China and India, and there is Iran; these are heavyweights which in principle do not fit into the US' overall concept on governing and ruling the whole world," Krasov concluded.

An absurd idea and a political move

Many Russian experts agreed that the US will not be able to implement the bill in practice.

Vladimir Baranov, head of a company which is expected to launch a ferry line between Vladivostok and the North Korean port of Rajin, said that this US move looks like a bluff.

"The US physically cannot control Russian ports – you have to visit the port authority, demand documents, that sort of thing… This is essentially a bluff by the US, an attempt to show that it controls the world. Meanwhile, we'll be transporting whatever it is we need to transport," he said.

Alexander Latkin, a professor at the Vladivostok State University of Economics and Service, for his part, said that any attempt by the US to control Russian ports looks absurd.

"How could the US control our ports' operations? It might have been possible if the US possessed a percentage of the ports' equity, but as far as I know all of the shareholders are Russian. It is essentially a political move by the US. The Americans don't have any legal or economic basis for controlling our ports," he explained.

Meanwhile, Maxim Grigoryev, head of the Foundation for the Study of Democracy, told Sputnik Radio that while the US House of Representatives adopted the bill virtually anonymously, this entire situation has a touch of tragicomedy to it.

"A declaration about keeping an eye on what's going on in Russian ports sounds rather funny. However, what happened is that the US judicial authority has empowered its executive counterpart to present a report on this matter, which includes telling whether the sanctions against North Korea are being violated via Russian, Iranian and Syrian ports," according to him.

"I'd like to point out that the bill did not outline any inspection procedure as it would’ve been completely pointless, but the wording itself does look rather ambiguous. The US doesn't mind that it basically dictates that other countries must adhere to US legislation," he said.

It is Not Just North Korea But Asia That is in US Crosshairs
Furthermore, he added, this bill was likely adopted to pave the way for another move against Russia.

"Clearly this is a preparation for some sort of statement to be made against Russia, Syria or China. This measure is unlikely to be related to real politics, because the US doesn't have any jurisdiction over other countries. But this is an obvious foundation for some propaganda campaign," Grigoryev concluded.