On the Brink of Chaos: France Faces 'Hardest Choice in History' Ahead of Runoff 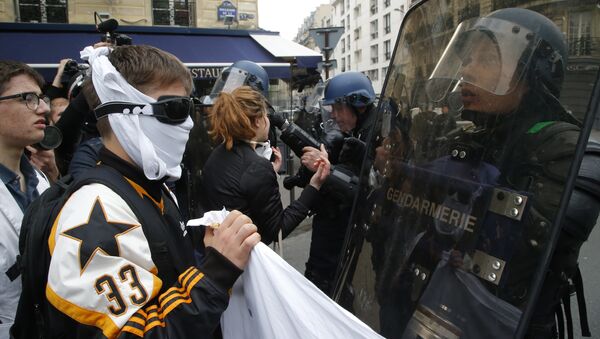 © AP Photo / Michel Euler
Subscribe
The recent student protests in Paris exacerbated even further the already tense situation in France ahead of the May 7 presidential runoff; the protests once again indicated that the country is facing the hardest choice in the last 60 years of its history, Russian expert Alexander Vershinin told Sputnik.

Macron’s Win in French Presidential Election Predicted Days Before Runoff
The work of about ten high schools in Paris was temporarily suspended on Friday when students and teachers held rallies to protest both centrist Emmanuel Macron and the far-right leader Marine Le Pen, the winners of the first round of the French presidential elections who will proceed to the second, final round, scheduled for May 7.

The rallies featured slogans such as "Neither Le Pen nor Macron, neither the Fatherland nor the boss," a clear nod to "Le Pen's nationalist views and Macron's pro-business ties," according to AP.

In late April, several hundred students marched through Paris to protest both candidates for the French presidency.

"This was confirmed the latest TV debates, polls and the Paris protests. France is facing the most difficult choice in the last 60 years of its history.By and large, the French welcome neither Macron nor Le Pen, and neither of these presidential candidates is able to bring a new constructive concept to their country," Vershinin said.

"The latest student protests indicate that this era [of social conflict] has returned to the country," he added, referring to the volatile period of civil unrest in France during May 1968 which was punctuated by demonstrations and massive general strikes as well as the occupation of universities and factories across France.

Vershinin did not rule out that May 7 will see Emmanuel Macron's victory, which will be provided by a divided electorate.

"Most likely, Macron will be able to gain 60 percent of the vote in the runoff," Vershinin said, citing Macron's random supporters, who may help add to his win.

It remains to be seen whether Macron will be able to rely on this "politically divided conglomerate" during parliamentary elections in France in June 2017," the Russian expert concluded.

Meanwhile, a fresh Ipsos poll revealed on Friday that independent presidential candidate Emmanuel Macron has improved his lead over right-wing leader Marine Le Pen by 2.5 percent since Wednesday and is expected to win the second round of the election with 61.5 percent against her 38.5 percent.

According to the survey's results, 93 percent of those who said they would back Macron were sure of their choice, while 88 percent of Le Pen's supporters expressed the same certainty in their voting intentions.

Sputnik Refutes Macron's 'Fake News' Accusations Over Alleged Offshore Account
The poll showed that 76 percent of the respondents intend to vote in the upcoming run-off election, while 24 percent of French voters plan to abstain.

On April 23, Macron and Le Pen emerged as the two top contenders in the first round of the election, and are set to face each other in the run-off on Sunday.

Macron won with a slight advantage in the first round, having received 24.01 percent of the votes, while Le Pen got 21.3 percent.

000000
Popular comments
Macron speaks in support of the EU and is programmes, Macron does not speak about the people.