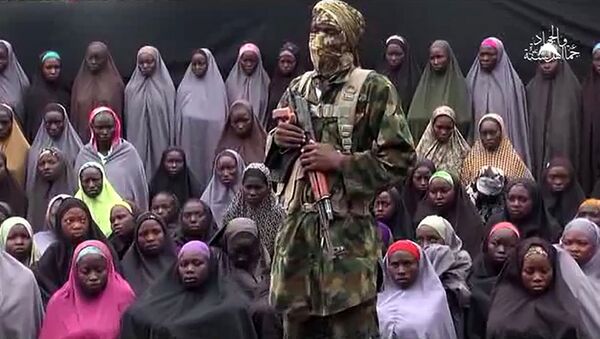 © AFP 2021 / HO
Subscribe
The Nigerian government has announced that 82 of the Chibok schoolgirls kidnapped by the Boko Haram terrorist group in 2014 have been freed.

"I can confirm they have been released," a senior government minister told AFP before the official government announcement.

Earlier reports put the number of girls released at between 50 and 83.

A Nigerian military official told AP that the girls were found near the town of Banki in Borno state. The girls are apparently still in military custody.

"The girls were released through negotiations with the government," the official said, according to Reuters. In the government's official announcement, it was revealed that the release came in exchange for detained members of the terrorist group.

Late Saturday night in Nigeria, the personal assistant to Nigerian President Muhammadu Buhari tweeted that "huge numbers" would be released.

The kidnapping was one of the highest-profile incidents in the nearly decade long war between Boko Haram and Nigerian forces. In April 2014, 276 girls were kidnapped by Boko Haram from the Government Girls Secondary School in the small town of Chibok. Several dozen were able to escape that night, but more than 200 remained in the hands of the group. Their plight sparked the Bring Back Our Girls campaign and drew attention to the atrocities of terrorists in Nigeria.

Twenty-one of the kidnapped girls were released in October following negotiations, but nearly 200 remained in the terrorists' hands.

Some 2 million have been displaced and more than 20,000 killed in Boko Haram's eight-year insurgency in Nigeria. According to Amnesty International, 2,000 girls and boys have been abducted by Boko Haram in the past three years and used as sex slaves, fighters and suicide bombers.

"Our hopes and expectations are high," as they wait for an official announcement and list of names, family members of the girls say. "This is good news to us," Christian pastor Enoch Mark, whose two daughters were kidnapped from the Chibok school, told AFP. "We have been waiting for this day. We hope the remaining girls will soon be released."

Nigeria announced in December that Boko Haram had been "crushed," but the announcement was mocked by the group's leader days later and suicide bombings and other attacks by the group continue.