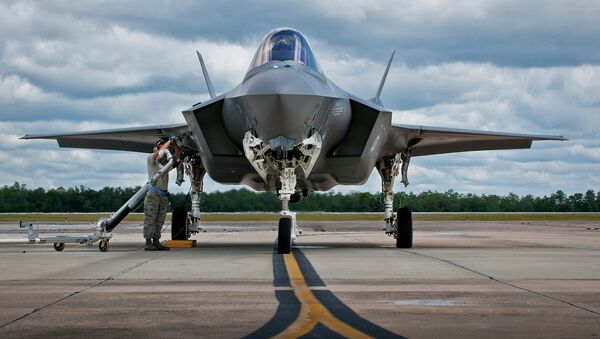 © Samuel King Jr./ for U.S. Air Force
Subscribe
International
India
Africa
It’s not only the F-35s themselves that are proving to be difficult to produce and poorly designed: The Joint Strike Fighter program office itself is being chided by the US Congress for ineptitude.

As the US Congress has worked to get the next US budget in order, an internal congressional memo has found that "the Joint Strike Fighter program office provided insufficient justification and incomplete information in an untimely manner," Stars and Stripes reports.

Not only did the F-35 program office act in a seemingly incompetent or at least unprofessional manner, the office has effectively hampered Congress’ ability to conduct oversight of the Pentagon’s most expensive weapons program in US history.

The document goes on to scold the office further, noting, "it is imperative that requested information is received promptly for proper congressional oversight of this major defense acquisition program." The document formed an attachment to the recent omnibus spending bill passed by both chambers of Congress.

Lawmakers joined the club of those who see the highly touted F-35 as riddled with flaws from fire-prone engines to poorly designed cockpits. (The military newspaper cited "inadequate wing strength" for the F-35C carrier variant as just another one of the many issues plaguing the F-35.)

In addition to its questionable performance as a fifth generation fighter jet, the program’s managing bureaucrats appear suffer from a similar ineptitude.

"We need to have better communications, we need to demand that they watch expenses … They need to be transparent, don’t they?" Roger Williams, a House member from Texas, wondered.

Beyond the failure to efficiently send documents and other critical information about the F-35 to office holders, the report condemned the Pentagon’s acquisition strategy. Seventeen F-35s produced in 2015 and 2016 "were not part of their respective low rate initial production contracts" as a consequence of the Defense Department’s "contracting strategy."

Critics were skeptical that the F-35 Joint Program Office acted out of incompetence in forgetting to send over vital information about one of Congress’ biggest investments. "It’s very telling that the Joint Program Office is not providing information Congress is asking for at this time in particular, when the program office is really working to secure a significant increase in production," Dan Grazier of the Project for Government Oversight said.

Military analysts say the "production inefficiencies" could be the result of operational bottlenecks at the Fort Worth, Texas, assembly line where F-35s are built. “Production is happening at a much lower rate than we hoped for," Richard Aboulafia of the Teal Group told Stripes.

As if the program hadn’t suffered enough expensive hiccups and mishaps already, Aboulafia went on to say, “it might be that the planes need to be modified and reworked.”