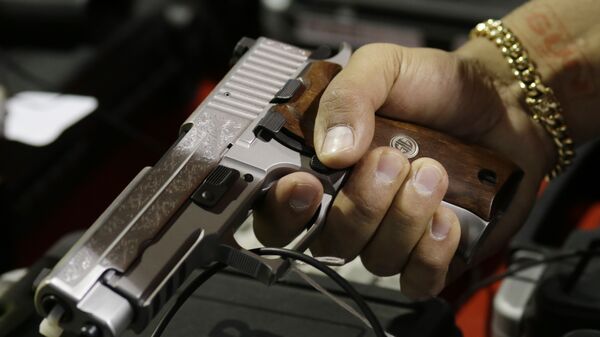 The US Army announced on Wednesday that the 101st Airborne Division will be its first unit to be equipped with the SIG Sauer P320 semi-automatic pistol, winner of the 2016 Modular Handgun System (MHS) competition. The P320 is meant to eventually replace the Beretta M9 as the US Military’s standard service pistol.

The word "modular" in "Modular Handgun System" refers to the P320's multiple grip sizes and flexibility for accessories like flashlights. Adaptability for a variety of operators and conditions was one of the key qualities the Army sought out during the MHS contest.

SIG Sauer won the MHS contest that the Army and Air Force held in 2016 to choose the M9's replacement. Twelve pistols were entered into the competition, and in January 2017 the Army announced SIG Sauer as the winner. "The Army determined that this MHS (full size handgun, compact handgun, ammunition, and ancillary components) was the best value in terms of its performance capability, the terms and conditions of the vendor's proposal, and price," reads the accompanying media release.

Glock, which also entered the competition, filed a protest with the Government Accountability Office (GAO). Given the size and scope of the contract, a protest from one of the runners-up was expected.

However, the Army is free to continue to develop the specifics of the P320 roll-out until the GAO makes its ruling in early June.

"Our first fielding of this is going to the 101st Airborne Division at Fort Campbell, Kentucky, by the end of the calendar year," Power said.

The 101st Airborne is one of the Army's most elite and famous units, nicknamed "the tip of the spear" by former US Defense Secretary Robert Gates. Some 1,400 members of the Division are currently deployed in Afghanistan in operations against al-Qaeda in Daesh.

The SIG Sauer is already in use by the Royal Thai Police, which purchased more than 150,000 of the handguns in 2015.