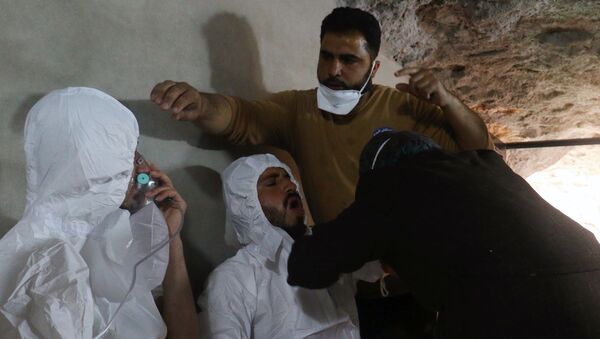 Delegation head at Astana talks and Special Presidential Representative for Syria said that Russia has irrefutable evidence indicating that the events in Khan Shaykhun were a provocation, and Moscow will continue convincing the West to change the position in this matter.

Syrian Foreign Ministry Accuses France of Involvement in Idlib Chemical Incident
ASTANA (Sputnik) – Russia has irrefutable evidence indicating that the events in Khan Shaykhun were a provocation, and Moscow will continue convincing the West to change the position in this matter, Russian delegation head at Astana talks and Special Presidential Representative for Syria Alexander Lavrentyev said.

"You understand perfectly well that Russia has all the irrefutable evidence that this is a pure provocation on the part of individuals and structures that are not interested in achieving peace on the Syrian soil, but unfortunately all our explanations, arguments, attempts to prove stumble into complete misunderstanding  of the West," Lavrentyev told reporters.

"Nevertheless, we will work in this direction, try to convince the countries to change their position in relation to the government of Syria," he added.

The establishment of de-escalation zones in Syria needs no UN Security Council authorization but the guarantor states will notify it as they are confident in the UN support, Alexander Lavrentyev said.

"The Astana process is an absolutely independent mechanism, capable of making decisions and monitoring their implementation, the three guarantor states are sufficient to implement the reached agreements. No UN Security Council authorization is needed to take any decisions," Lavrentyev told reporters.

The four Syrian de-escalation zones will be a no-go area for coalition combat aircraft, the guarantor states will monitor the issue closely, Russian delegation head at Astana talks and Special Presidential Representative for Syria said.

"The work of combat aircraft in zones of de-escalation, especially of the international coalition planes, is not expected at all, with or without notification. The issue is closed," Lavrentyev told reporters.

"The only thing that the international coalition aviation can work on is targets of the Islamic state [banned in Russia], located in the area of concentration of forces of this group, in the area of Raqqa, in other settlements in the region of Euphrates, Deir ez-Zor and on the Iraqi territory," Lavrentyev stressed.

"As for their actions in the de-escalation zones, at the moment all these zones are closed for their flights. It is not written down in the memorandum, but combat flights cease over these territories, and we as guarantors will closely monitor all actions in that respect," he added.

Jordan may be one of the observers in the Syrian de-escalation zones, Russian delegation head at Astana talks and Special Presidential Representative for Syria added.

"While this list [of observers] has not been outlined yet, but we believe that the Jordanians could participate, given that it is about southern Syria, which is one of the four zones of de-escalation," Lavrentyev told journalists.

"But observers from any third country, their participation in the observation mission…is authorized only with the consent of all three guarantor states," he noted.

A part of Syrian armed opposition starts seeing the need to stop fighting against the government and to start fighting extremists, but there are still forces that interfere with the process, Russian delegation head at the Astana talks and Special Presidential Representative for Syria said.

"The Syrian opposition is quite mixed, and there are forces that we could truly call moderate opposition that understood – and some are beginning to understand now – that it is necessary to end military fighting [against Syrian government] and to start fighting against the Nusra Front [a terrorist group outlawed in Russia], against the radical Islamists that now are the obstacle in Syrian settlement. But there are also forces that continue to hinder the process, that don't care if this is the Astana process or the Geneva process, because it interferes with their interests to maintain the lawlessness and to continue the suffering of the Syrian people," Lavrentyev told reporters, when asked if there were any assurances from the opposition regarding the memorandum on four safe zones.

Lavrentyev explained that resolving this situation in many ways did not depend on Russia alone, but also on the regional powers that are not concerned with peace and are "pursuing their own interests."

The adoption of the document on the creation of a working group to monitor the exchange of detainees in Syria has been postponed, Alexander Lavrentyev said.

"For today, the work is finished, we have closed all the unclear issues at the experts’ level, we have approved the final text of the agreement on the creation of a working group on the exchange of detainees. But its final adoption is postponed because all the heads of delegations still need to consult with their capitals," Lavrentyev told reporters.

On Thursday, the fourth round of the Astana talks on Syrian reconciliation concluded, with the parties adopting a memorandum on four safe zones in Syria.

The next round of the talks is expected to be held in mid-July.