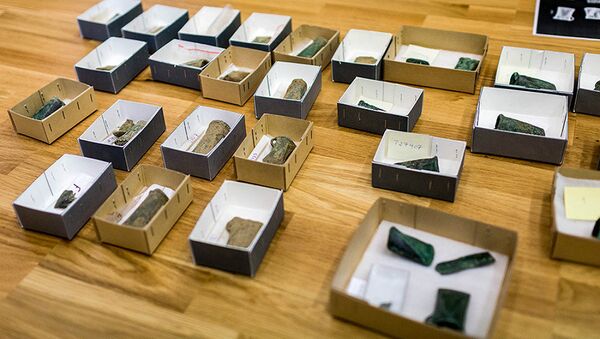 © Photo : NTNU University Museum
Subscribe
It's always pleasant to come across an old stash. Norway unearthed a spectacular cache of two dozen Bronze Age axes, which were deemed to be the country's oldest.

The Grapes of Wrath: Danish Scientists Discover Secret Saga of Viking Vineyards
The startling find was made in late April in Stjørdal municipality, not far from the city of Trondheim. The discovery was made in a field in the village of Hegra not far from Trondheim airport in Værnes.

The cache featured 24 ax heads, a knife blade and some fragments and dated back to the Late Bronze Age, approximately 1100-500 BC. It was unearthed by archeologists from Norwegian University of Science and Technology (NTNU) with the help of local amateurs with medal detectors.

"It's a great find. This is Norway's largest inventory of Bronze Age objects. It feels really special to think that someone buried it on purpose, and until now no one has seen it in 3,000 years," Tove Eivindsen of the Science Museum told the Norwegian newspaper Bladet.

The supply of weapons was initially discovered by brothers Joakim and Jørgen Korstad in January this year with the help of metal detectors. After stumbling upon nine axes, a spearhead, a casting mold and possibly a fragment of a Nordic blowing horn called a lur. After contacting county archeologist Eirik Solheim, another underwater search was carried out, resulting in the collection of 30 Bronze Age artifacts.

"The 24 axes are a particularly special part of this discovery. There have never been so many axes in a single deposit before in Norway, and they're rare in the Scandinavian context," archaeologist and researcher Merete Moe Henriksen at NTNU Department of Archaeology and Cultural History told scientific web portal Phys.org.

While this easily qualifies as the largest stash of Bronze Age artifacts in Norway's history, it is still too early to say why the objects were hidden or buried in the ground.

According to Henriksen, the axes could have been buried for religious reasons. Alternatively, they might have been cached temporarily, with the intention of smelting, which, for instance, was a known practice in the Late Iron Age. The Stjørdal municipality is known for its rich concentration of ancient rock art and rock carvings. The collection of stashed weapons may be enhanced further, as archeologists plan to make one more excavation attempt in the Hegra field this autumn. This may place the findings in the right context or reveal the reason why the objects were stashed.