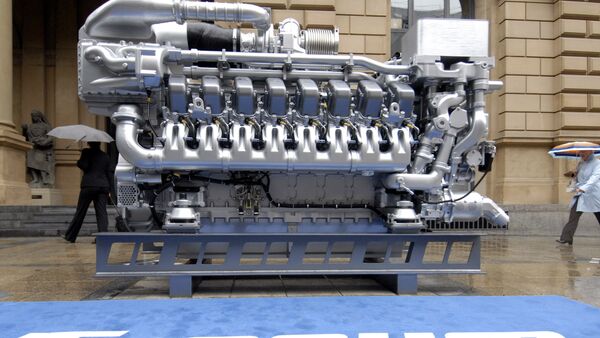 In what could be an indication of collaboration in jet engine development program, Rolls Royce has decided to assemble its 12V and 16V 4000 M90 engines at Indian government-owned shipbuilding company Garden Reach Shipbuilders and Engineers Ltd (GRSE) diesel plant in the eastern state of Jharkhand.

Rolls-Royce Opens Service Center for Defense Forces in India
New Delhi (Sputnik) – An option for the local production of parts in the future has also been agreed between GRSE and Rolls Royce. “The engines have a rated power of 2,040 and 2,720 kW respectively, and will be installed in various naval vessels built by GRSE. The agreement includes the transfer of MTU technology related to assembly, testing and painting,” a statement of Rolls-Royce Power Systems said.

Since 2004, GRSE assembles Series 4000 engines in India from components and parts sourced from MTU. The now-agreed assembly is significantly more complex than the work done previously.

“It is an important contribution to our indigenization program in line with the government’s Make in India strategy. We plan to take forward the partnership between GRSE and MTU partnership and to achieve 40 percent indigenous content progressively for MTU 4000 series engines,” Rear Admiral (ret.) V K Saxena, Chairman and Managing Director at GRSE said.

Supply of naval vessels to neighboring countries like Mauritius, Sri Lanka, Bangladesh will have major contribution to fulfill Indian government aims to reach $2 billion defense export in next two years. Indian shipbuilders like Goa Shipyards and GRSE use MTU engines in patrol vessels.