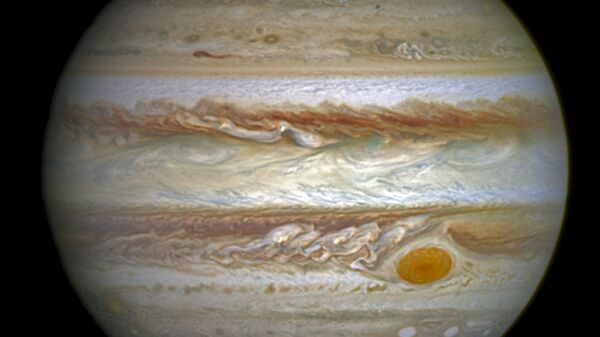 © AP Photo / ESA/Hubble
Subscribe
International
India
Africa
Any third-grader can tell you about Jupiter's Great Red Spot (GRS), a titanic cyclone that has raged for centuries in Jupiter’s atmosphere. It sticks out like a blemish on photos of the gas giant, and by most estimates is two or three times as large as the Earth itself.

But the GRS is shrinking, and has been doing so for a while – and nobody is totally sure why.

The Hubble Space Telescope noticed that the GRS was at its smallest size ever recorded during a 2014 observation. At 10,250 miles across, the GRS was "less than half the size of some historical measurements," according to a NASA statement accompanying the observation. "Historic observations as far back as the late 1800s gauged the storm to be as large as 25,500 miles on its long axis."

Not even NASA's Juno orbiter, which arrived at Jupiter in 2016, has been able to solve the mystery of the GRS's shrinkage.

A new video from Science Channel explains the two leading theories as to why the GRS is shriveling up. Like a wildfire or someone on the Santa Clarita Diet, the GRS has sustained itself by devouring its own kind. When it comes across another storm, it cannibalizes it and adds its mass to the larger storm.

But if the GRS were to eat a vortex spinning in the opposite direction of it, or a slowly-moving storm, that could slow the cyclone's spin and cause the storm to shrink. That's one theory.

The other is straightforward: there haven't been enough storms for the GRS to eat. Even its chemical composition is still under debate.

In a sense, it isn't surprising that we know so little about the GRS's death since we still don't really know how it formed or how it works.

Could this be the beginning of the death knell for Jupiter's most famous feature? Mighty as the GRS is, it is a storm and storms all end eventually. But if the GRS vanishes, then it isn't clear what will happen to Jupiter's atmosphere. The GRS generates huge amounts of heat, warming the entire upper atmosphere of the planet, and scientists aren't certain what the loss of this heat would do to the gas giant.

But GRS fans shouldn't worry too much, because a successor may arise: there's the "Little Red Spot," a storm that formed in 2000 and has been growing in size ever since. In 2008 it was half the size of the GRS, and perhaps someday will overtake it entirely. It is also possible the the Great and Little Red Spots will at some point meet and converge into one storm. Maybe we can call it the Just Right Red Spot.