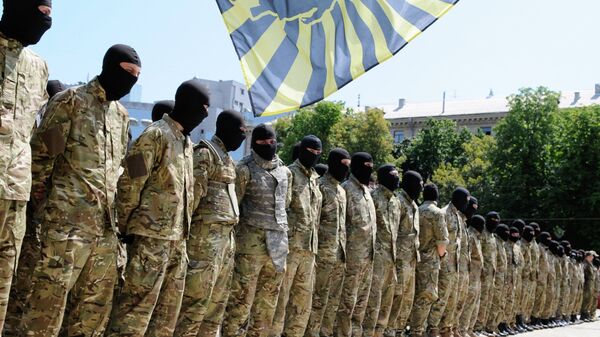 The US House of Representatives has passed a bill that prevents the country from arming and training Ukraine's infamously ultra-nationalist Azov Battalion. Speaking to RIA Novosti, Russian political analyst Kirill Koktysh suggested that the legislation sends a strong signal to Kiev.

The US House of Representatives has passed the bill containing the provision which prohibits using funds allocated by the Department of Defense for the fiscal year ending September 30, 2017, to provide arms and training to Ukraine's Azov Battalion.

"SEC. 8131. None of the funds made available by this Act may be used to provide arms, training, or other assistance to the Azov Battalion," the document says.

In accordance with the bill, $150 million will be appropriated for Ukraine in the form of training, equipment, "lethal weapons of a defensive nature," logistics support, as well as intelligence support to the military and national security forces of Ukraine.

Ukraine’s Azov Battalion Wants to Fight Russians in Syria
It specifies, however, that "none of the funds made available by this Act under section 9014 for 'Assistance and Sustainment to the Military and National Security Forces of Ukraine' may be used to procure or transfer man-portable air defense systems [MANPADS]."

Commenting on the matter, Russian political analyst Kirill Koktysh, ‎Associate Professor at the Moscow State Institute of International Relations (MGIMO), expressed his surprise at the US Congress' sluggishness.

"Ukrainian nationalism grows into Nazism — the Azov Battalion cultivates Nazi symbols, proclaims Nazi goals. It's rather surprising that the US Congress has paid attention to it just now. The topic is sensitive for a weighty lobby in the United States," Koktysh stressed.

According to Koktysh, the bill's provision sends a strong signal to Kiev.

"Kiev is shown the boundaries within which it must remain. For Kiev itself, this, of course, will be an unpleasant thing since it undermines the ideological foundations of the current regime… The US sends a signal that moderate nationalists, and not radicals, should play the first fiddle in the country," the expert said. 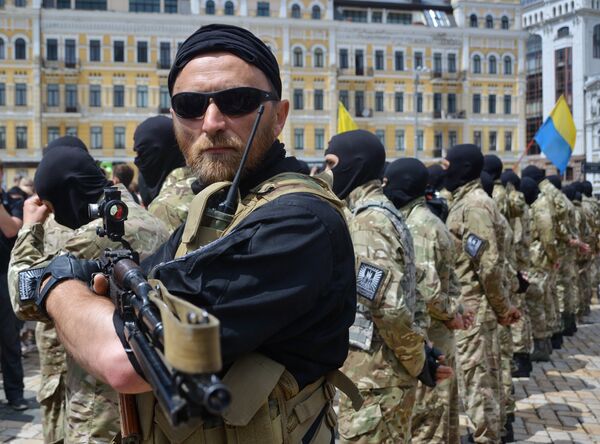 People Gather in Ukraine's Odessa to Commemorate Anniversary of 2014 Massacre
Back in 2015, similar provisions were offered by Congressman John Conyers, Jr. (D-Mich.) who warned the US legislature against supporting ultra-right forces in Ukraine.

During the consideration of the Department of Defense Appropriations Act of 2015, Congressmen John Conyers, Jr. (D-Mich.) and Ted Yoho (R-Fla.) offered bipartisan amendments to block the training of the Azov Battalion and prevent the transfer of MANPADS to Ukraine.

Biletsky was also known as the founder of a neo-Nazi group, the Social-National Assembly (SNA) in 2008, the media outlet added.

The amendments had been passed by the US House of Representatives.

However, in January 2016 James W. Carden, a contributing writer at The Nation and the executive editor for the American Committee for East-West Accord, raised the alarm over Congress' opening the door for funding neo-Nazi groups in Ukraine.

"An official familiar with the debate told The Nation that the House Defense Appropriations Committee came under pressure from the Pentagon to remove the Conyers-Yoho amendment from the text of the bill," he wrote.

"What is clear is that by stripping out the anti-neo-Nazi provision, Congress and the administration have paved the way for US funding to end up in the hands of the most noxious elements circulating within Ukraine today," Carden warned.

Time will tell whether the current bill's anti-neo-Nazi provision will be put in jeopardy.