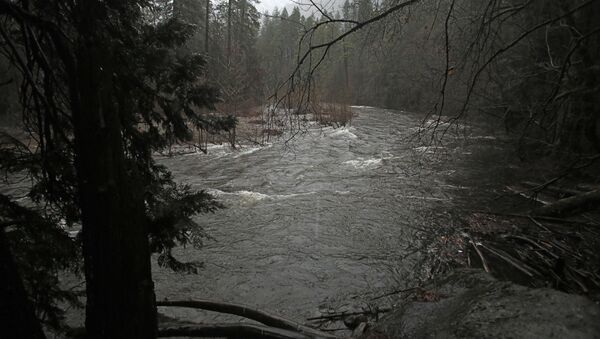 © Gary Kazanjian
Subscribe
International
India
Africa
Swollen rivers have caused severe damage in Missouri, Arkansas and other US states. Five Missourians have been killed, as have at least seven Arkansans, including an 18-month-old girl who is presumed dead after she was swept away by floodwater.

Here's a look at Pocahontas area from @tracy_ann74… I added some markers for reference. pic.twitter.com/Gk6cE6QhtT

​Damage has also spilled into neighboring states like Illinois and Tennessee. Since the flooding began on the weekend, more than 20 people have died.

​Arkansas Governor Asa Hutchinson has deployed 100 members of the National Guard as well as 25 guard vehicles to fight the floods and rescue those endangered by floodwater. Numerous levees throughout the state have been breached, he said.

​"This is the most extensive flooding in an urban area that I've ever seen as governor," said Hutchinson as he declared a state of emergency. More than 500 people have been evacuated throughout Arkansas.

​The US Coast Guard has halted water traffic along a 14.5 mile stretch of the Mississippi River. US Highway 63 has also been shut down in Arkansas' Lawrence County after floods from the Black River breached nine levees and forced an evacuation of the city of Pocahontas (population 6,500).

"We're surrounded by water," Portia Mayor Kelly Duckworth told the Arkansas Democrat-Gazette. "The water is rising one foot an hour. We don't know what to expect."

That's a stop sign poking out the water. Just to give you an idea of how high the water is. #Pocahontas pic.twitter.com/rNDZcurIFB

​Towns fewer than 30 miles from St. Louis like West Alton (population 522) and Eureka (population 10,189) have experienced severe flooding of their own. While the former was evacuated, the latter managed to avoid major flooding damage through the use of 250,000 sandbags. Eureka was badly damaged in a December 2015 incident, but the city has learned its lesson about flood safety.

"We were able to save a lot a lot of homes and businesses that before we lost," said Eureka Mayor Kevin Coffey.

​More than 100 highways around St. Louis and 270 roads throughout Missouri are closed, according to the state Department of Transportation.