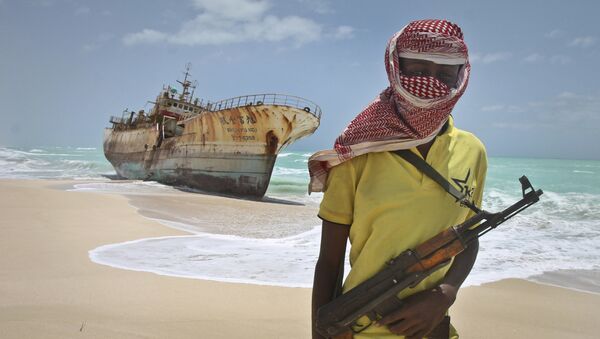 Somalia's infamous pirates are back in business after a five year period of stagnation, according to a recent report by the International Chamber of Commerce.

The report which came out on Thursday, May 4, claims that pirates and armed gangs attacked upward of 43 ships and "captured 58 seafarers" in the first quarter of the year 2017. While the phenomenon appears to be spiking worldwide, including off of the coast of Nigeria and the Southern Philippines, the largest explosion has hit the Gulf of Aden and the lawless coasts of Somalia.

After being forced out by international naval forces in the late-2000s, piracy seems to have returned with a vengeance to the Horn of Africa. The increase in maritime banditry in the region is a blow to the long battle to stem piracy that has been fought by the international shipping industry, as well as world powers such as China and the United States who have dispatched forces to protect shipping lanes.

Lisa Otto, a researcher at Coventry University, who has focused on piracy in Africa agreed that counter-piracy measures may have slackened somewhat.

"I think that one of the obvious ways in which we can see a slackening is in the use of armed guards. We have seen a trend previously when pirates would fire at a vessel to see if there were armed guards on board, often an exchange of firefight would follow, then the pirates would make off. But now some of the defenses are down, therefore they [pirates] are not expecting to come under attack," Ms. Otto told Sputnik.

The shipping industry transports roughly US$700 billion worth of cargo though the risk-fraught corridor each year. The recent spike in attacks will mean that the economic costs associated with piracy — such as insurance for shipping companies and onboard armed guards — will only increase. In fact, a recent report by the NGO Oceans Beyond Piracy, claims that the costs caused by piracy gangs in Somalia increased to US$1.7 billion in 2016 from US$1.3 billion in 2015.

The worldwide costs associated with piracy have been slithering toward US$7 billion since 2010 due to elaborate and expensive counter-piracy measures. Although zero vessels were hijacked in 2016, there were 27 reported attacks involving pirates, including an attack on a UK chemical tanker which fended off the pirates when armed guards aboard the vessel engaged them in a firefight.

Due to the decline in successful hijackings from 2008, shipping companies have started to let down their guard. In December, a NATO naval force was pulled out of the Horn, propounding the decline in attacks as its reason for leaving. However, the relaxed security standards have been pointed to as a reason for the recent crescendo in pirate activity. This year, there have been two major hijackings by Somali pirates, one in the Aris-13 tanker in March, and another on a commercial Indian ship in April.

Some argue that the ongoing threat is a reflection of the fact that little has been done to remedy what is often said to be the root of piracy: illegal fishing by foreign vessels, depriving Somali fishermen of their livelihoods. Somali fisherman have been widely quoted as arguing that the presence of foreign fishing vessels has depleted the local fish stock, causing them to take up arms to defend their shoreline and search for an alternative source of income.

The international navies that were dispatched to the Gulf of Aden in 2008 to try and pacify the piracy epidemic had a UN mandate to deter hijackings, but not to block foreign fishing vessels that some say constitute the source of the problem.

However, the coasts of Somalia and the Horn of Africa are not the only parts of the African continent haunted by the specter of piracy. Attacks in West Africa are also increasing.

When asked what the international community needs to do to combat piracy in the long-term, Ms. Otto said, "having a two-pronged approach; addressing the conditions of instability on land, but also looking to the sea to continue having some kind of strategic approach at sea such as naval deployments."