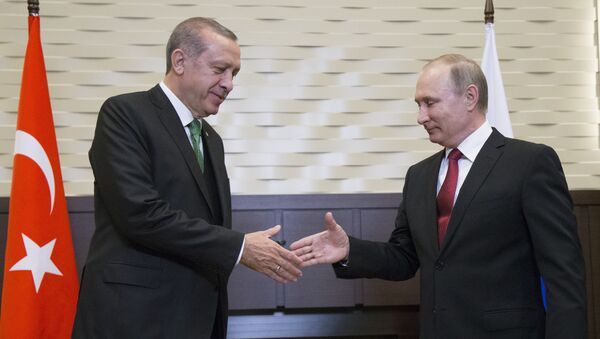 According to Myasoyedov, both Russia and Turkey are poised to capitalize on the scrapping of bilateral trade restrictions.

The development of Russian-Turkish relations was high on the agenda of the Sochi talks, which were followed by a joint press conference where the two leaders responded to questions.

The Russian President noted, for his part, that the Russia-Turkey relations have attained a special status and been fully restored.

"It is very good that we have an opportunity to have an official meeting in order to discuss the key issues of bilateral ties and  the international agenda…The very fact that our joint work [is conducted in] such a mode shows that Russian-Turkish relations are attaining a special nature, a special status, and are being fully restored," Putin said.

He also stressed that the sides had agreed on a comprehensive decision to cancel mutual trade restrictions during the Sochi talks.

"You have asked, when it will be possible to say that the restrictions, which were imposed earlier, have been removed. You can say about that today… Any restrictions destroy the economy and ultimately inflict damage on our producers," Putin said.

At the same time, he added that restrictions on visa-free travel and supplying of tomatoes from Turkey to Russia would remain for the time being.

As an exception, Russia will provide an opportunity for facilitated entry into the country for Turkish specialists and businessmen, he said.

Commenting on the results of the Sochi talks, Sergey Myasoyedov said that the development of Russian-Turkish cooperation, including economic partnership, is a worthy response to all those who try to drive a wedge between two Eurasian countries.

"In general, bolstering cooperation between the Eurasian countries is predetermined by the situation on the map and the ties that have developed over the past few years," he said recalling that "there are only three Eurasian countries: Russia, Kazakhstan and Turkey."

Now that European politicians and the US have repeatedly tried to set Turkey at loggerheads with Russia, Moscow's moves to build an alliance with Ankara and develop bilateral economic and business cooperation are "always advantageous," according to Myasoyedov.

"And it seems to me that lifting restrictions on trade and economic ties between Russia and Turkey is a measure which will prove beneficial for both countries and both peoples," he pointed out.

Russian-Turkish relations deteriorated following the downing of a Russian Su-24 bomber over Syria by the Turkish Air Force in November 2015.

Referendum Controversy: Why Turkey's Weakness Not in the Interest of Russia
At the beginning of 2016, Russia retaliated by imposing a number of restrictive measures, including a ban on charter flights, food and flowers imports.
The countries' relations normalized in June 2016 after Turkish President Recep Tayyip Erdogan apologized for the incident.

In August, Russian President Vladimir Putin said that Russia would gradually lift economic restrictions it had imposed on Turkey.