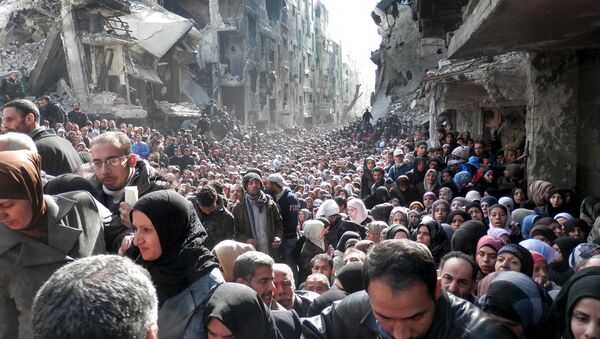 © AP Photo / UNRWA
Subscribe
On the morning of May 4, Israeli soldiers invaded East Jerusalem and demolished residential and commercial structures. While claimed by Israel to be an exceptional response to building without permits, the attack was no isolated incident – in fact, destruction of property is an avowed policy of the Israel Defense Forces (IDF).

Structures were destroyed in the at-Tour neighborhood, overlooking the Old City of occupied East Jerusalem, al-'Eesawiyya town, in the center of the city, an al-Walaja village, south of Jerusalem.

​The official use of dispassionate rationales to justify or explain the destruction of commercial and residential property in the occupied territories is nothing new — government ministers have frequently claimed demolition is used to enforce building codes and regulations, or as a counter-insurgency measure to impede or deter militant operations. Human rights organizations such as Amnesty International counter that the Israeli government instead uses demolitions to collectively punish Palestinians and seize property for the expansion of Israeli settlements.

Moreover, the United Nations Office for the Coordination of Humanitarian Affairs has suggested building laws in the occupied territories — which are crafted by the Israeli government — are deliberately designed to discriminate against Palestinians, with strict administrative requirements and high fees making it extremely difficult for residents to obtain necessary permits, leaving them no choice but to build "illegally" to house their families and businesses.

​Whatever the truth of the matter, the scale of the damage is significant — the Israeli Committee Against House Demolitions estimates Israeli forces razed 48,488 structures in occupied Palestine between 1967 and 2015. The destruction is carried out despite repeated calls from the UN for the practice to be ended permanently, on the basis such actions "run counter to international law," and have a "serious and long-term negative impact" on Palestinians. In 2009, estimate suggested at least 60,000 Palestinians in East Jerusalem were at risk of forced eviction, demolition and displacement, and many others faced mounting pressure to leave the city as a result of "extensive physical, legal and administrative restrictions" that affected every aspect of their daily lives.

​Beyond the human suffering caused by the IDF's actions, the wider political ramifications of the destruction could be deleterious in the long-term. It fell mere days after Hamas leader Khaled Meshaal expressed support for the establishment of a Palestinian state adhering to borders agreed on in 1967, a seismic softening in Hamas' position on the long-running dispute between Israel and Palestine. More troublingly, it transpired mere hours after US President Donald Trump met Palestinian Authority President Mahmoud Abbas at the White House for the first time. Trump has expressed a pronounced desire to resolve the conflict once and for all, saying he is committed to facilitating an agreement between the two sides, and is willing to be "a mediator, facilitator, or arbitrator."

In response, Israeli Prime Minister Benjamin Netanyahu has welcomed Trump's enthusiasm, saying he will discuss "optimal ways" of achieving peace with the President, and hoped "changes are possible and the real peace is achievable."

​However, while such rhetoric may sound positive, Netanyahu's statement was issued on the same day Netanyahu cut an additional US$1 million from the UNESCO budget, in response to the board of the UN cultural agency voting in favor of a resolution calling Israel an "occupying power" in Jerusalem.

The reduction followed a move in March to eliminate US$2 million in human rights contributions after the passing of sanctions against Israel by the UN Human Rights Council, and the January axing of US$6 million from the country's UNESCO contribution after UN Security Council anti-settlement resolution 2334 was passed, which demanded Israel cease its illegal settlement enlargement policies.

Moreover, on May 3, the Israeli Supreme Court ordered construction of the controversial Annexation Wall to be resumed. It may be the "optimal way" of achieving "peace" in Netanyahu's eyes is the removal of all Palestinians from the occupied territories, and the construction of a vast physical barrier between the two states.

000000
Popular comments
What can one say that has not been said about the Je*ws before. Only falsehood, that they are decent people.