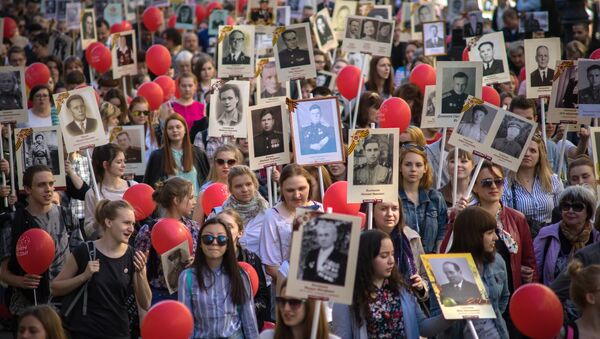 The second ever Immortal Regiment march commemorating those who fell in World War II will take place in Madrid on May 7, event organizers told Sputnik on Wednesday.

Former Yugoslavian PM to March Through Moscow With 'Immortal Regiment' on V-Day
MADRID (Sputnik) – Madrid saw its first ever Immortal Regiment event last year. Some 200 people marched through the streets of the Spanish capital to the central Plaza Mayor carrying photographs of their family members, people they knew and heroes that participated in World War II.

"I think around 1,000 people will take part. Apart from the Madrid association, we will also be joined by people from other parts of Spain, from Marbella, La Victoria and Guadalajara. We invited various Spanish social movements, such as the Spanish-Soviet Friendship Association, the International Brigades, the Global Platform Against War, the Communist Party of Madrid. Spaniards who are learning Russian will also take part," Blagoe Delo (Good Cause) charity association president and the Coordination Council of the Russian Compatriots in Spain, Roman Demyan, said.

The Madrid event will kick off at noon local time (11:00 GMT) on Sunday on Plaza de la Lealtad, where wreaths will be laid at the Monument to the Fallen for Spain. Participants will then proceed to Columbus Square where a concert will take place featuring Russian and Spanish performers. St. George ribbons will be handed out along with leaflets containing information about the event's cause.

"We invited the Belarusian and the Armenian diaspora. It is harder with Ukraine. We have complicated relations with official Ukrainian diaspora representatives, but we invited those Ukrainians that we know," Demyan said, stressing that only official national flags will be allowed at the march.

The main Immortal Regiment event commemorates WWII soldiers in marches held across Russia and other countries mainly on May 9, celebrated as Victory Day in Russia and the former Soviet republics.