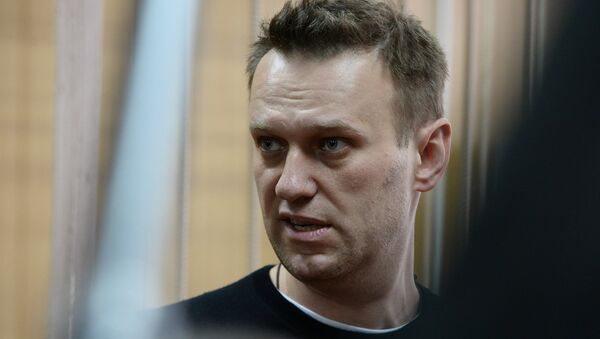 © Sputnik / Eugene Odinokov
/
Go to the photo bank
Subscribe
Russian opposition figure Alexey Navalny will appeal to the European Court of Human Rights (ECHR) over the regional court's decision to uphold his five-year suspended sentence on embezzlement of funds, according to Navalny’s lawyer Vadim Kobzev.

Earlier in the day, the Kirov region court upheld the five-year suspended sentence of Navalny over embezzlement of funds from the state-run KirovLes company.

"We will once again appeal this sentence in the European Court of Human Rights, as neither the Leninsky court of Kirov nor the Kirov regional court has enforced its [ECHR's] decision. According to the decision of the ECHR, the court had to acquit the defendant or drop criminal charges," Kobzev said.

EU Parliament Calls on Russia to Free Navalny, Other March 26 Protesters
According to Kobzev, in order to appeal to the ECHR, Navalny’s defense does not need to turn to other Russian courts.

On February 8, a court in Kirov found Navalny guilty of participating in a scheme to embezzle 16 million rubles ($270,000) from a timber firm KirovLes while working as an aide to the Kirov Region governor in 2009. He was handed a five-year suspended sentence and a fine of 500,000 rubles ($8,450). A second defendant in the case, Petr Ofitserov was handed a four-year suspended sentence with the same fine.

On February 17, Navalny's lawyer Vadim Kobzev said that his client had appealed the five-year suspended sentence.

The Supreme Court overturned the conviction after the ECHR said that Navalny's rights were violated during the trial. A re-trial was then scheduled, which found him guilty.

000000
Popular comments
The EHRC is the right place for nawalmy as western values always support criminals like chordochowsky, timochenko...
kooka
3 May 2017, 19:38 GMT2
000000
The courts should never have suspended the five year sentence. He should be locked up for every day of the sentence.