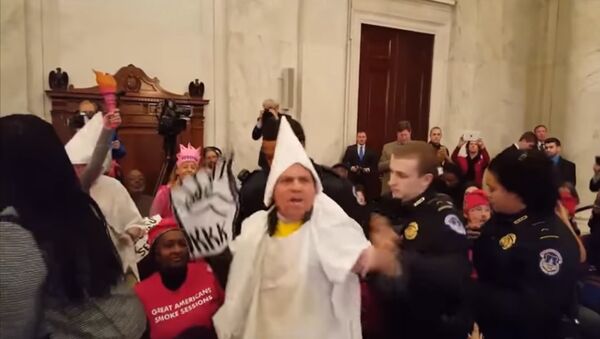 Three demonstrators from the anti-war group Code Pink were convicted on Wednesday on charges stemming from their disruption of Jeff Sessions’ confirmation hearing as US Attorney General in early January.

Desiree A. Fairooz was found guilty of parading or demonstrating on Capitol grounds and disorderly conduct, though she claims she’s only guilty of laughing.

She told the New York Times that she would continue her activism despite her disappointment with the decision, saying she’s "so disgusted with so many different aspects of our current government."

Dressed as the Statue of Liberty in a pink tunic and matching crown, Fairooz said she couldn’t contain herself when she heard Senator Richard Shelby (R-AL) suggest that Sessions’ record proved his commitment to equality.

"I just couldn’t hold it … It was spontaneous," she said of the laugh. "It was an immediate rejection of what I considered an outright lie or pure ignorance."

Two other activists, Lenny Bianchi and Tighe Barry, were also convicted on two separate charges of parading or demonstrating, but were acquitted on the count of disorderly conduct.

Barry described their protest as "absolutely peaceful," telling Sputnik that "The police grabbed us, dragged us outside, arrested us, along with 25 other people that were arrested that day," adding that "Most people don’t want Jeffrey Sessions as the highest ranking law enforcement officer in the country."

Bianchi and Barry both donned white hood and robes, mimicking the Klu Klux Klan, and Barry said he beckoned to the former Alabama lawmaker in a faux southern accent.

All three activists pleaded guilty as charged, though they rejected a plea deal and are demanding a trial. They face up to a year in prison.