Is There a Way of Removing Kim Jong-un as Leader of North Korea Without War? 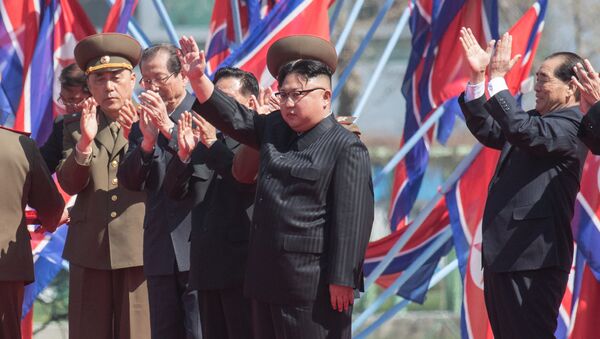 © Sputnik / Iliya Pitalev
/
Go to the photo bank
Subscribe
As tensions rise in North Korea, is there a scenario where Kim Jong-un was removed and the communist regime continues and could such a scenario involve Kim's uncle?

In the Face of Washington's Threats, North Korea Readies Another Nuclear Test
As the United States under President Donald Trump makes increasingly bellicose remarks about North Korea's leader Kim Jong-un he has responded with aggression and dire threats, leading many to fear what could be the outcome of the crisis.

It also emerged this week that South Korea still considers the northern half of the peninsula to be "occupied territory" and some hawks in Seoul are itching to restart the Korean War, which ended with a ceasefire in 1953.

But there are doves on both sides of the Demilitarized Zone and China is also keen to not only avoid conflict but retain the Democratic People's Republic of Korea (DPRK), which forms an important buffer on its eastern border.

Military strategists in Beijing are horrified at the prospect of sharing a border with the US-backed Republic of Korea, especially after Washington installed the THAAD missile system in Korea. 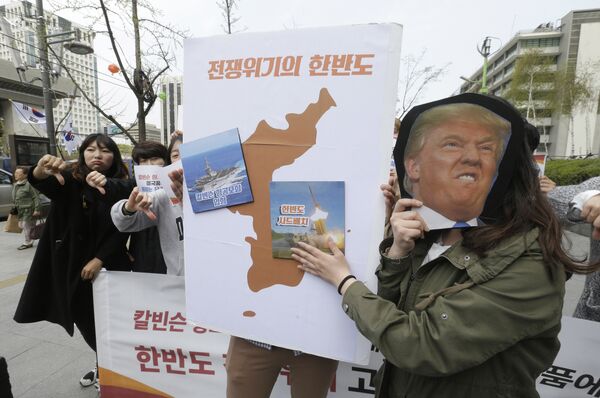 Protesters hold a cutout of US President Donald Trump and images of the USS Carl Vinson aircraft carrier and US missile defense system THAAD, right, on a map of Korean Peninsula during a rally against US deployment of the aircraft carrier to the Korean Peninsula, near the US embassy in Seoul, South Korea, Thursday, April 13, 2017
© AP Photo / Ahn Young-joon

One option for avoiding a full-blown war on the Korean Peninsula is for a regime change in Pyongyang.

Several Korea experts have highlighted Kim Pyong-il, 62, as a potential new leader of the DPRK if the erratic Kim Jong-un were to fall.

Kim Pyong-il is the half-brother of Kim Jong-il, the so-called Dear Leader, who led North Korea from 1994 until his death in 2011.

Kim Pyong-il, the younger half brother of KJI, presented credentials to the Czech President https://t.co/d3iXJjC4B8 pic.twitter.com/PsOOYi17km

Kim Jong-il had succeeded his father, Kim Il-sung, who had ruled the country since its foundation and in the late 1970s a serious rivalry was brewing between Kim Jong-il and his younger brother, who garnered a reputation as something of a playboy.

The elder brother finally lost his temper when he heard that parties were being held by his brother's supporters and people were shouting: "Long live Kim Pyong-il!" 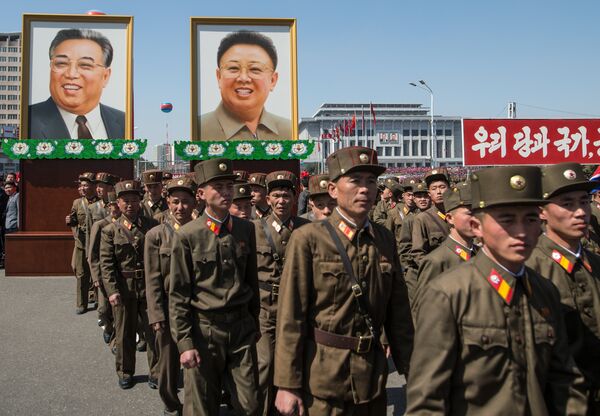 Portraits of Kim Il-sung and Kim Jong-il at a ceremony to open a new residential area on Ryomyong Street in Pyongyang.
© Sputnik / Iliya Pitalev
/
Go to the photo bank

He sent his brother into exile, with obscure postings in the political backwaters of Finland, Bulgaria and Hungary.

When another brother Kim Jun-un died in 2011, Kim Pyong-il returned to North Korea but was immediately put under house arrest and later sent abroad on another diplomatic posting.

Kim Pyong-il is currently the North Korean ambassador to the Czech Republic and keep a very low profile.

But Korea watchers say he shares an uncanny resemblance to his father, the Great Leader, Kim il-Sung and there has been speculation that doves in North Korea, possibly backed by China, might use him as a pawn to replace Kim Jong-un and preserve the status quo.

Kim Joo-il, a former soldier in the North Korean Army who now lives in London, told the Daily Express last year that Pyong-il is still very popular in North Korea and would be welcomed by many people. He is also reportedly in favor of reforming the regime and ending prison camps and torture of dissidents.

He said: "Kim Jong-un is afraid of him. Kim Jung-un thinks he is the rightful leader but Kim Pyong-il is more so in reality.

"The North Korean people all know him and support him. The North Korean government is trying to pretend Kim Jong-un has settled in but there is a power struggle in the regime."

Kim Jong-un is thought to suffer from a degree of paranoia and has conducted many purges against those within the regime who he fears are plotting against him.

Two North Korean nationals suspected of involvement in his death by poisoning were surprisingly sent home by Malaysia in March.

Last year a magazine in Hong Kong reported that Kim Pyong-il was the preferred choice of many North Koreans who want a change in policy.

It also reported that he was seen as the biggest potential threat from to Kim Jong-un and North Korea had beefed up its National Security Agency surveillance of Kim Pyong-il in Prague.

000000
Popular comments
Why not remove Trump and Pence; are they not the bigger gangsters who have already killed many in their first 100 days?!
karlof1
3 May 2017, 18:24 GMT2
000000
What and why on earth would some one wants or wish someone else dead? Korean on the north system is base on founding persons and those fellow citizens have every right to respect and worship the founding father as they wish. Why on earth are we so evilled that want to be bring death to anyone?
peaceactivist2
3 May 2017, 18:01 GMT
000000
Newsfeed
0
New firstOld first
loader
LIVE
Заголовок открываемого материала
Access to the chat has been blocked for violating the rules . You will be able to participate again through:∞. If you do not agree with the blocking, please use the feedback form
The discussion is closed. You can participate in the discussion within 24 hours after the publication of the article.
To participate in the discussion
log in or register
loader
Chats
Заголовок открываемого материала
Worldwide
InternationalEnglishEnglishMundoEspañolSpanish
Europe
DeutschlandDeutschGermanFranceFrançaisFrenchΕλλάδαΕλληνικάGreekItaliaItalianoItalianČeská republikaČeštinaCzechPolskaPolskiPolishСрбиjаСрпскиSerbianLatvijaLatviešuLatvianLietuvaLietuviųLithuanianMoldovaMoldoveneascăMoldavianБеларусьБеларускiBelarusian
Transcaucasia
ԱրմենիաՀայերենArmenianАҧсныАҧсышәалаAbkhazХуссар ИрыстонИронауОssetianსაქართველოქართულიGeorgianAzərbaycanАzərbaycancaAzerbaijani
Middle East
Sputnik عربيArabicArabicTürkiyeTürkçeTurkishSputnik ایرانPersianPersianSputnik افغانستانDariDari
Central Asia
ҚазақстанҚазақ тіліKazakhКыргызстанКыргызчаKyrgyzOʻzbekistonЎзбекчаUzbekТоҷикистонТоҷикӣTajik
East & Southeast Asia
Việt NamTiếng ViệtVietnamese日本日本語Japanese俄罗斯卫星通讯社中文（简体）Chinese (simplified)俄罗斯卫星通讯社中文（繁体）Chinese (traditional)
South America
BrasilPortuguêsPortuguese
NewsfeedBreaking
12:51 GMTDozens of New Yorkers Stage Anti-Vaccine Protest at a Food Court Chanting F**k Joe Biden
12:41 GMTFour Inmates Dead, One Injured in Attempted Jailbreak in Philippines, Reports Suggest
12:40 GMTVirginia Giuffre to Reportedly Hand Prince Andrew Secret Doc Able to Defeat Her Lawsuit
12:37 GMTRussia Scrambles Three Su-35 Jets to Escort US B-52 Bomber Approaching Border in Pacific Ocean
12:32 GMTCyclone Gulab Likely to Make Landfall in India on Sunday Evening
12:21 GMTUN Chief Warns 'Humanity Unacceptably Close to Nuclear Annihilation'
12:09 GMTKremlin Says It Hopes for Consistency on Minsk Agreements From Germany After Merkel Leaves
12:02 GMTRussian Presidential Spokesman Says Gazprom Fulfilling All Obligations
11:54 GMTLabour Leader Says It's 'Not Right' to Say Only Women Have a Cervix
11:43 GMT'F**k Them': Carlson Responds to Yet Another Call to Fire Him Over 'Great Replacement' Theory
11:42 GMT'Piece of Scum': UK Labour Deputy Leader Lashes Out at Tories
11:14 GMTUK Transport Minister Calls on Britons to Behave Normally, Says There is No Shortage of Fuel
11:12 GMTHamas Has No Place in Sudan But Will It Give Up on Former 'Base'?
11:05 GMTJapan Should Look Into Having Nuclear Submarines, Candidate for Ruling Party Head Says
11:05 GMTIsraeli Soldiers Shoot Down Nazi Flag Raised Near Outpost in West Bank - Photo, Video
10:52 GMTTaiwan Strait Situation 'Complex and Grim', Xi Jinping Says as He Calls for 'National Reunification'
10:46 GMTHillary Clinton Urges to Call Her 'Madam Chancellor', But Netizens Come Up With Other Names
10:39 GMTGerman Green Party Might Find Some 'Rare Lizards' to Stop Nord Stream 2, AfD Co-Chair Warns
10:35 GMTWorld War II Bomb Suspends Elections at Several Polling Stations in Wuppertal, Germany
09:47 GMTTunisian Lawmaker Says Ennahda Party's Rigidity Led to Mass Resignation of Members