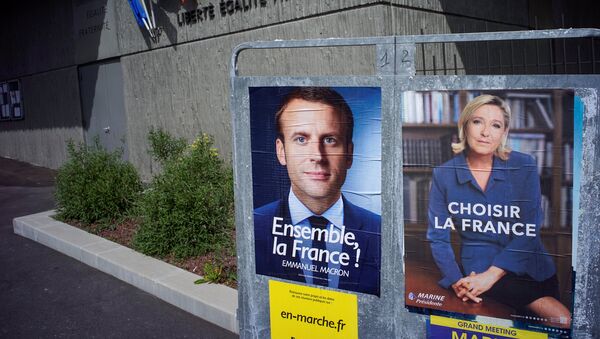 The upcoming debate will become no walk in the park for French presidential candidate Marine Le Pen and her political rival Emmanuel Macron. While both candidates are unlikely to go down without a fight, the question remains open whether the debate will change the margin between the top two presidential hopefuls.

Le Pen's Chances Against Macron in French Presidential Run-Off Up by 1% - Poll
French independent presidential candidate Emmanuel Macron and his right-wing opponent Marine Le Pen are due to cross swords during the upcoming debate, set for 9 p.m. (7 p.m. GMT) on Wednesday.

The debate will take place just four days before the decisive second round of the French presidential election. In the first round, Macron won 24.01 percent of the votes, while Le Pen won 21.3 percent.

The latest survey conducted by OpinionWay predicted Wednesday that Macron is likely to come out on top with 60 percent of the votes against Le Pen's 40 percent.

Speaking to Radio Sputnik on April 25, Dr. Pierre Haroche, an expert in French politics from King's College London, assumed that Macron would win the second round comfortably.

"I think that could happen again this time, as it did in 2002 but also in regional elections in 2015 when the National Front came first in the first round and eventually failed to win any region. So, there is an important tradition in the electorate to do that," Haroche suggested.

Ahead of the debate Macron signaled that he is unwilling to go down without a fight.

"I am not going to employ invective. I am not going to use clichés or insults. I'll use hand-to-hand fighting to demonstrate that her ideas represent false solutions," he told BFM TV, as quoted by Reuters.

Le Pen's Presidency to Put Rights, Freedoms of French Citizens at Risk - Macron
Previously, the independent presidential hopeful had repeatedly claimed that Le Pen's anti-euro and anti-immigration policies would be "dangerous" for France.

For her part, Le Pen pointed out that Macron would merely follow in Francois Hollande's footsteps.

"His program seems to be very vague, but in reality, it is a simple continuation of [Socialist President] Francois Hollande's government," she said.

In his interview with Sputnik France Yannick Moreau, a member of the center-right Republicans party, echoed this stance.

"Voting for Emmanuel Macron means that a person wants to back the continuation of the disastrous rule of [current French President] Francois Hollande. If you like Hollande, you will be crazy about Macron," Moreau underscored.

Why Macron's Warning of 'Frexit' Nothing But a Planned Election 'Circus Act'
"I can understand when they say that there is no need to vote for Marine Le Pen, but at the same time, it's necessary to say that voters should support neither Marine Le Pen nor Emmanuel Macron," he added.

Earlier, following the first round of the presidential election demonstrators took to the streets of Paris on April 27 chanting the slogan "Neither Macron nor Le Pen." According to social media reports, protests against Le Pen and Macron also took place in a number of other French cities.

Meanwhile, the candidates have enlisted the support of the politicians voted off in the first round.

For instance, former French Prime Minister Francois Fillon has taken the side of Macron.

However, Nicolas Dupont-Aignan, the leader of the right-wing Debout la France (France Arise) party who was knocked out in the first round of the election signaled that he will campaign with Le Pen.

"We share the same vision of France's independence and protection of its nationals," Le Pen said in an interview with Le Parisien newspaper.

Melenchon Vows Not to Vote for National Front in French Run-Off
Earlier, during a joint press conference, the National Front leader said that she would appoint Dupont-Aignan as France's next Prime Minister.

The debate, which will be broadcast by two French national channels, TF1 and France 2, is expected to be completed shortly before midnight.

In accordance with the result of the draw, the leader of National Front will be allowed to speak first. The candidates have discussed every detail of the upcoming debate including the temperature in the room (19-20 degrees Celsius), the length of the table (2.5 meters) and even the background picture (an image of the Elysee Palace).

The question then arises whether the debate will change the expected margin between the top two candidates.