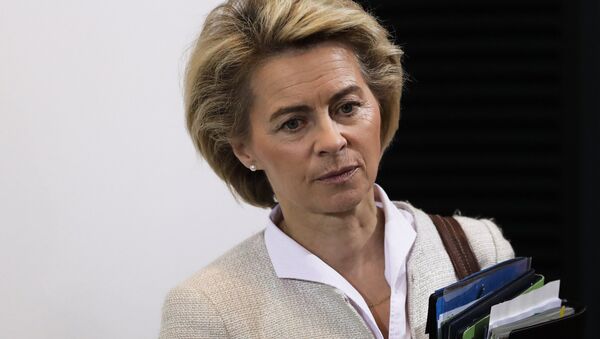 © AP Photo / Markus Schreiber
Subscribe
A scandal surrounding alleged right-wing extremists in the German army has engulfed Defense Minister von der Leyen, who has unsuccessfully tried to distance herself from allegations of misdoing with a public dressing-down of the army.

Bundeswehr to Train Saudi Military Despite Severe Criticism
German Defense Minister Ursula von der Leyen has alienated her own troops with sharp criticism of the Bundeswehr following a series of scandals involving suspected far-right sympathies, terrorism and abuse of recruits.

Most recently, last week a 28-year-old German Bundeswehr lieutenant named Franco A. was arrested on suspicion of terrorism after allegedly planning neo-Nazi terror attacks and posing as a Syrian asylum seeker in Bavaria.

Speaking to Germany's ZDF television channel on Saturday, von der Leyen connected the series of recent incidents but laid the blame at the door of the Bundeswehr, accusing officers of "weak leadership."

She said that Franco A. had not been apprehended earlier due to a "misunderstood sense of camaraderie" among troops which stopped superiors from reporting him, despite signs that he held far-right sympathies including a master's thesis he wrote espousing nationalist sentiments.

She followed up her criticism with an open letter to the troops published on the Defense Ministry website, where she reiterated that "we can no longer speak of individual cases" and repeated her view that a mistaken sense of esprit de corps was at fault for the abuses not being reported.

On Wednesday, the head of Germany's Bundeswehr Association of Soldiers, Andre Wuestner, told MDR that since von der Leyen has been in her post three and a half years, her criticisms should be aimed at herself.

Describing von der Leyen's actions as "unbelievable," he said he had received "a lot of letters from disgruntled soldiers."

"Nobody can understand how a minister can now go and grandstand, so to speak and judge her team," Wuestner said. 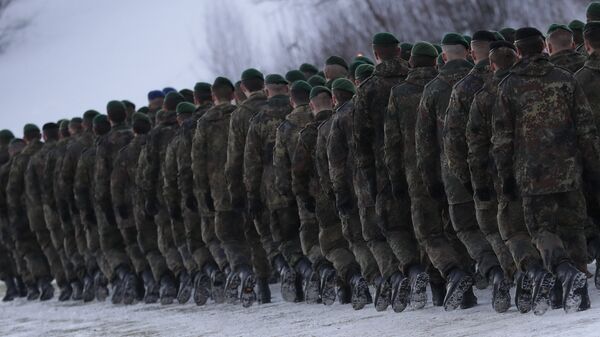 "I expect her to apologize, … [von der Leyen], who clearly did not have control of her office, has sat herself on the grandstand and called the whole Bundeswehr into question."

Franco A., who was arrested on Wednesday on suspicion of terrorism, reportedly had far-right sympathies and had listed possible targets for a terror attack. They included Berlin Die Linke politician Anne Helm, who is disliked by the far right because of her public opposition to a memorial for the victims of the 1945 Dresden bombing.

In addition, Franco A. had also registered as a Syrian asylum seeker in late September 2015. Although some reports claim he was preparing a "false flag" terror attack, he has not revealed what his motives were.

Toothless Panzers: Hundreds of Bundeswehr Military Vehicles Kaput
According to Der Spiegel, Franco A. was able to pass an interview and claim asylum status despite speaking only broken Arabic. The Moroccan interpreter switched to French for the interview, which Franco evidently spoke well, claiming to be a member of the Christian French minority in the village of Tel al-Hassel.

He falsely claimed to be called "David Benjamin," to have faced persecution by Daesh for having a Jewish-sounding name, and to have sustained shrapnel injuries; none of the claims were checked.

The scandal comes after several reports of misconduct in the German Bundeswehr. In January, Der Spiegel reported on the violent sexual abuse of recruits at barracks in Pfullendorf. 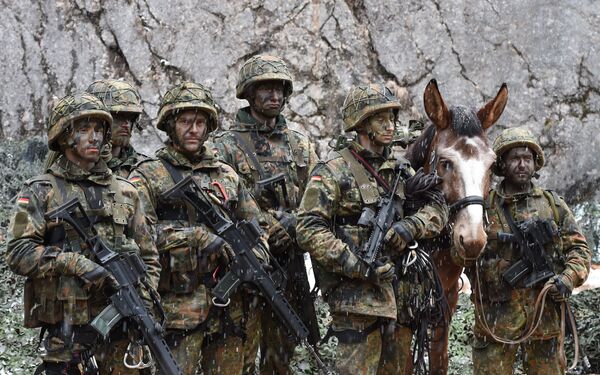 Mountain infantry soldiers, pictured after an exercise of the mountain infantry brigade 23 of the German Bundeswehr at an exercise area near the Bavarian village Bad Reichenhall, southern Germany, on March 23, 2016
© AFP 2021 / CHRISTOF STACHE
In March, it emerged that a private in the German Gebirgsjaeger (mountain troops) had been sexually abused at barracks in Bad Reichenhall. Local prosecutors allege that bullying, sexual misconduct and animal cruelty took place there.

Last week it was reported that army instructors at a barracks in Thuringian Sondershausen verbally abused new recruits, calling them "genetic waste," and forced them to endure long runs that sometimes caused physical collapse.

In the aftermath of that report, Defense Minister Ursula von der Leyen fired the army's chief instructor, General-major Walter Spindler, in the belief that Spindler's administration did not investigate the claims thoroughly enough.

In addition, the Defense Ministry announced last month it is looking into 275 reported cases of far-right extremism within the country’s military ranks, including soldiers saying “Heil Hitler,” performing Nazi salutes and calling for violence against migrants.

According to RND News, the Defense Ministry believes that Franco A. was a member of a network of five suspected right-wing extremists operating in the German army.

000000
Popular comments
And they wonder why Russians feel offended by having these fascists marching up and down their borders again.