'Putin-Merkel Meeting Sends a Strong Signal to the World' 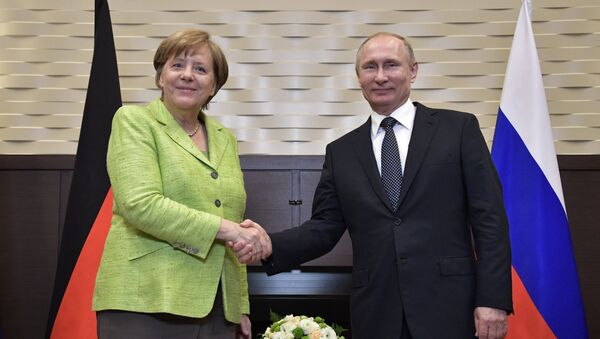 The very fact that Russian President Vladimir Putin and German Chancellor Angela Merkel have held negotiations after a long hiatus is a positive signal, Russian academic Vadim Trukhachev told Radio Sputnik, adding that Merkel's visit to Sochi may have become a step toward lifting sanctions on Russia.

Merkel's Visit to Russia: German Chancellor Braces For a 'Recon Mission'
The fact that a high-level summit was held by the leaders of such big and influential powers as Russia and Germany is itself a significant event, Vadim Trukhachev, a senior lecturer in the Department of Foreign Policy at Russian State University for the Humanities, told Radio Sputnik.

On May 2 German Chancellor Angela Merkel arrived in Sochi to hold talks with Russian President Vladimir Putin. Between two rounds of meetings, the leaders had conducted a press conference.

"We discussed international problems, including the Syrian crisis and the situation in Ukraine," Putin told journalists commenting on the ongoing summit.

The Russian president underscored that the situation in Ukraine "remains a source of serious concern," and highlighted "the need for the implementation of Minsk agreements by all sides."

On the other hand, Putin emphasized that Russia "decisively condemns any use of chemical [weapons]." He told reporters that Moscow and Berlin agreed on the need for a full investigation into Syria's Khan Shaykhun chemical incident.

"Russia seeks to build cooperation with the Federal Republic of Germany on the principles of mutual benefit, respect, equality and consideration of each other's interests. Despite the known political difficulties and fluctuations in the global economic environment, Germany remains the leading foreign policy partner of our country…. Speaking about the situation in bilateral trade, we noted with pleasure the growth of the trade turnover, in January and February; it increased by 43 percent," the Russian President said.

Merkel's Visit to Russia a Trump Card in Upcoming Election
Speaking to Radio Sputnik, Vadim Trukhachev called attention to the fact that Moscow and Berlin have not held talks in such a format for a long period of time.

Indeed, Merkel had previously visited Russia on May 10, 2015, to attend the celebration of the 70th anniversary of victory over Nazi Germany.

In this context, the meeting between the two influential leaders sends a strong signal, he believes.

"The fact that two large, influential countries are not arguing but talking is a good thing…. Given the fact that such meetings have not been held for a long time, the very fact of its taking place is already an event, and this event is positive," Trukhachev told Radio Sputnik.

The academic didn't exclude that Merkel's visit could become a step toward lifting anti-Russian sanctions. However, according to Trukhachev, it is unlikely that the German Chancellor would become the driver of the process.

"It seems to me that [Merkel's visit to the Russian Federation], is one small step toward lifting sanctions, since European countries, including Germany, suffer from European measures against Russia. But I think that Merkel will not take the lead in lifting the sanctions," he said.

The academic suggested that such a mission could be delegated to Austria.

"It often happens that what Germany's heart thinks Austria's tongue speaks," Trukhachev said. "The Austrians sometimes play the role of a 'messenger' I can't exclude that in this case, such a scenario may take place."

Putin Urges Int'l Community to Avoid Crimes Like 2014 Odessa Massacre in Future
For his part, Russian political analyst Vladimir Bychkov believes that Merkel is seeking to find out whether Berlin could play a part in resolving the conflicts in Ukraine and Syria.

"No one in Russia had really expected [Merkel] to come. The German chancellor previously said that she would pay a visit [to Russia] only after significant progress is made in Ukraine and Syria. Perhaps, the light at the end of the tunnel has indeed appeared somewhere. But it is visible only in Moscow and Washington, not Berlin," Bychkov told Sputnik.

"I think that Merkel will come [to Russia]… on a reconnaissance mission. Will she have a place in the upcoming Russia-American chess game titled 'geopolitics?'" he emphasized.

In an interview with Radio Sputnik, Russian political expert Alexander Kamkin suggested that Merkel's visit to Russia could become the chancellor's trump card in the upcoming elections.

"The election will soon take place, and in recent months, Chancellor Merkel has started to change her rhetoric. For example, her statements on the migration crisis have changed, and her visit to Russia, among other things, can be viewed as a signal to German businesses, which have long criticized the chancellor for imposing anti-Russian sanctions," Kamkin told Radio Sputnik.

Merkel's visit to Russia is also viewed as a preparation for the G-20 summit, which will take place in Hamburg in July.