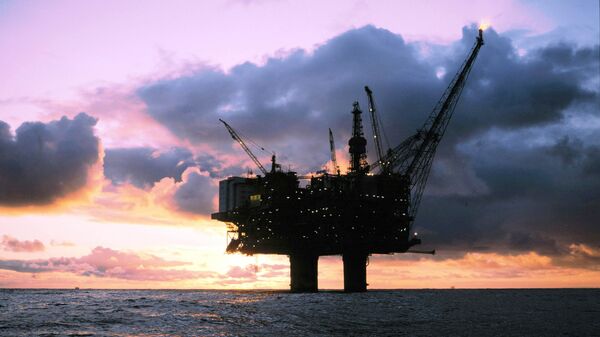 © AFP 2023 / OYVING HAGEN / SCANPIX NORWAY
Subscribe
International
India
Africa
Recently, Norway doubled its estimates of undiscovered oil and gas resources in its region of the Barents Sea in a formerly disputed area bordering Russia. In addition to fueling the debate over whether they should be found and tapped, this news also raised concern about Norway's own safety.

NATO Gets All Hot & Bothered for Norwegian Archipelago, Russia Says Stay Out
The new forecast by the Norwegian Petroleum Directorate (NPD) predicted about 2.8 billion standard cubic meters of oil equivalent (17.6 billion barrels) could yet be found in the Barents, as opposed to a previous forecast of 1.4 billion. About 60 percent of the undiscovered resources in the Norwegian areas of the Barents Sea are expected to be in liquid form, and the remainder in natural gas, the NPD said. NPD Director General Bente Nyland told Norwegian newspaper Dagens Næringsliv that the oil, condensate and gas reserves that may be lying under the surface of the eastern Barents Sea could be worth as much as NOK 900 billion ($105bln). She also made a reservation, though, that the figure was associated with some uncertainty and could potentially turn out be lower or much higher.

Meanwhile, the NPD's new estimates are feared to be capable of triggering an international conflict over the oil-rich areas of Norway's Svalbard archipelago. According to Arild Moe, a senior researcher at the Fridtjof Nansen Institute, Norway may find itself in an increasingly hostile environment.

"If the oil industry develops a great interest, it would also lead to a great political pressure against Norway. An open conflict will only become likely, however, if Norway opens this part of the shelf for industrial development," Arild Moe told Norwegian national broadcaster NRK.

Norway Invests Billions to Milk Dry Old Oil Deposits
At present, no country denies that Norway has administrative authority in the sea areas around Svalbard, but Oslo is isolated internationally in its view that the Svalbard Treaty does not apply to the continental shelf. The Svalbard Treaty stipulates equal treatment for all the 42 countries that have signed the agreement. If it were to be applied to the oil-rich shelf, Norway could no longer favor Norwegian companies or impose high taxes for foreign companies operating there.

According to Arctic expert Per Arne Totland, Norway's Svalbard policy is now being threatened in many ways.

"There may be reason to believe that once this dish is made to look as attractive as it has been through the new resource estimate, international interest could increase. The conflict therefore becomes clear and is coming closer to the surface," Per Arne Totland told NRK.

Science & Tech
Arctic Norway Boasts Another 'Doomsday Depository'
The perspectives of oil drilling around the pristine Norwegian archipelago, however, were met with strong resistance from, among others, Norwegian NGO Nature and Youth.

"It is sheer nonsense to believe that these resources will ever be recovered. This area extends hundreds of miles north of the ice rim and would lead to emissions 75 times as high as today's," Nature and Youth Deputy Head Gaute Eiterjord told NRK.

In 2010, Norway and Russia signed a treaty to end a decades-old conflict over maritime borders, widening the area that can be explored and setting the stage for drilling in the formerly disputed zone to begin in 2017. Exploration in the Barents Sea has been underway for several decades, yet only the Goliat oilfield and the Snøhvit natural gas field are currently in operation.