Merkel's Visit to Russia a Trump Card in Upcoming Election 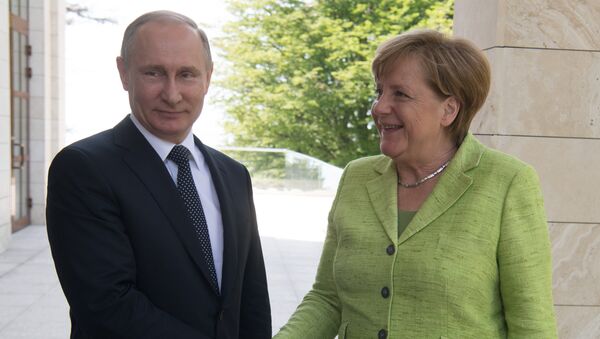 Russian President Vladimir Putin is meeting with German Chancellor Angela Merkel on May 2, in Sochi. In an interview with Radio Sputnik, political expert Alexander Kamkin said that despite existing disagreements a binding thread between Moscow and Berlin remains.

According to the expert, the negotiation could help the parties maintain dialogue.

"On the one hand, Russian-German relations are rather complicated, since the parties have opposite positions on the Ukrainian, Crimean and Syrian issues. I don't think that they will be able to find any common denominator on these issues. But the exchange of opinions, in any case, is useful and shows that a binding thread between Moscow and Berlin remains," Kamkin told Radio Sputnik.

In Kamkin's opinion, Merkel's diplomatic move will also have a significant influence on domestic politics and German voters, in particular.

"The election will soon take place, and in recent months, Chancellor Merkel has started to change her rhetoric. For example, her statements on the migration crisis have changed, and her visit to Russia, among other things, can be viewed as a signal to German businesses which have long criticized the Chancellor for imposing anti-Russian sanctions," the expert said.

Merkel's Visit to Russia: German Chancellor Braces For a 'Recon Mission'
According to him, Merkel seeks to demonstrate that she is ready to maintain dialogue with Russia and "listen to Vladimir Putin, whom she has severely criticized."

"German media have launched a fierce anti-Russian campaign over the last years, and many Germans are disappointed with this situation. They do not want this confrontation, and I think that most voters are in favor of a dialogue with Russia. I am sure that a visit to the Russian Federation will be favorably received by most of the German audience, and Mrs. Merkel takes it into account," Kamkin concluded.

Russian President Vladimir Putin and German Chancellor Angela Merkel will meet in Sochi to discuss the situation in Ukraine and the implementation of the Minsk agreements, as well as the fight against terrorism and the Syrian issue.

Merkel's visit to Russia is viewed as a preparation for the G-20 summit, which will be held in Hamburg in July.