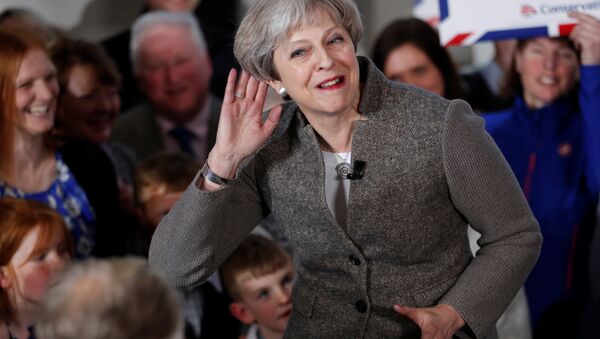 Guy Verhofstadt, the European Parliament's top Brexit negotiator, has subtly trolled UK Prime Minister Theresa May on Twitter, provoking howls of derisive laughter across the social network - however, hardcore Brexiteers have also taken the opportunity to snipe at the Belgian MEP.

"Strong and stable." The austere campaigning slogan has spread across the media like wildfire since May called the June 8 election, emanating copiously from the mouths of government ministers in their every public appearance.

Some suggest the Prime Minister alone used the phrase 57 times in the 10 days from April 18, when the vote was announced.

Perhaps due to its panting ubiquity, many UK voters have already expressed fatigue and cynicism at the mantra, taking to social media to mock it mercilessly.

On May 1, they were joined by a prominent non-UK skeptic.

Verhofstadt's invocation of the "strong and stable" refrain cannot have been accidental — only his motive and meaning is up for debate, although his phrasing strongly suggests he believes May lacks the necessary grasp of the multifarious issues at the heart of Britain's secession from the European Union, and her approach to date has not been serious.

Any #Brexit deal requires a strong & stable understanding of the complex issues involved.The clock is ticking — it's time to get real.

His sucker-punch came a mere day after leaked details of European Commission President Jean-Claude Juncker's disastrous dinner with the Prime Minister, which he said he left "ten times more skeptical" than before, due to May's seeming ignorance of the realities of departing the bloc.

This Theresa May cardboard cutout on Amazon (they really do sell everything) is getting an utter roasting #strongandstable #generalelection pic.twitter.com/DHmcz76fQh

Juncker slammed her overly-optimistic, unrealistic expectations of how long the process would take, and how successful it would be for Britain.

Juncker was so flabbergasted he reportedly called German Chancellor Angela Merkel afterwards to label May "deluded" and "on another galaxy."

Strong and stable leadership? After reports of May's Brexit dinner with Juncker it's more like weak, wobbly, ignorant, delusional leadership

#Brexit negotiator #Verhofstadt teases #May using "strong & stable" mantra —clearly Brussels as irritated with Tory leadership as most of us https://t.co/EAXVjiJBrn

Others were less impressed.

Verhofstadt talks about being strong and stable, if anyone has seen him in full flow the last thing you would think of is stable 😂😂😂 https://t.co/eQ1rpTXE9W

@SwichSaucisson @GuyVerhofstadt But if you dig a little deeper our financial services are more valuable to the EU than JCJ and his Verhofstadt stooge will admit.