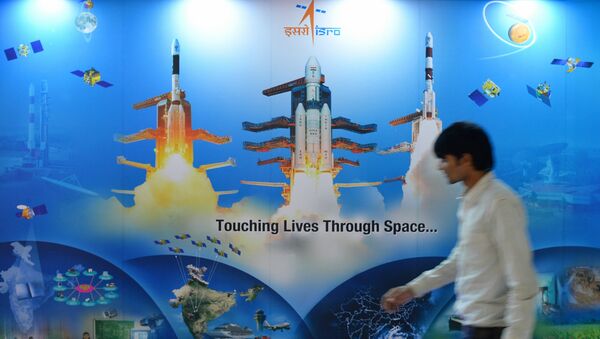 Indian Space Agency Comes Up With an App Indicating Solar Power Potential
New Delhi (Sputnik) — The team working on the project developed a solar panel to fit on the roof of a car, along with an internal gearbox, control electronics for the battery and solar panel, and a conversion kit for fitting an electric motor to a vehicle with an internal combustion engine.

The vehicle was powered by ISRO's famed Lithium-ion batteries, with a high power supercapacitor to meet the power demands to achieve required torque. ISRO also ensured to not compromise the safety while integrating various subsystems.

The vehicle was successfully test-driven, including an uphill drive. The space agency will now focus on building indigenous Lithium-ion fuel cells, supercapacitors and an electric motor.

"ISRO is doing a lot of things in addition to launching satellites. And all projects are interlinked and laying down the foundation for an industrial complex which will boost innovation and job creation. They have started sub-contracting many of their product building processes, which again will help in the growth of industries," Dr. Mayank N. Vahia, Department of Astrophysics, at the Tata Institute of Fundamental Research, Mumbai, told Sputnik.

With 10% of NASA's Outlay, Indian Space Agency Aims for Jupiter & Venus
India is aiming to push the use of electric vehicles to tackle rising pollution in its cities with the government setting a target of 6 million electric and hybrid vehicles on the roads by 2020 under the National Electric Mobility Mission Plan 2020 and Faster Adoption and Manufacturing of Hybrid and Electric Vehicles.

The high cost of batteries, a majority of which are imported, is a major hindrance to the development of the sector. Yet another challenge is to create a network of docking stations or charging stations for electric vehicles although that is more of a demand-related problem.

"A helping hand is required to create the infrastructure… There are two concerns for electric vehicles-first is cost and second is infrastructure," Mint quoted Abdul Majeed, partner and national auto practice leader, PricewaterhouseCoopers as saying.

The government recently asked ISRO to share its technology on Lithium-ion batteries with other public and private sector firms to give a push to the production of batteries in India and bring down the cost of electric vehicles.

000000
Newsfeed
0
New firstOld first
loader
LIVE
Заголовок открываемого материала
Access to the chat has been blocked for violating the rules . You will be able to participate again through:∞. If you do not agree with the blocking, please use the feedback form
The discussion is closed. You can participate in the discussion within 24 hours after the publication of the article.
To participate in the discussion
log in or register
loader
Chats
Заголовок открываемого материала
Worldwide
InternationalEnglishEnglishMundoEspañolSpanish
Europe
DeutschlandDeutschGermanFranceFrançaisFrenchΕλλάδαΕλληνικάGreekItaliaItalianoItalianČeská republikaČeštinaCzechPolskaPolskiPolishСрбиjаСрпскиSerbianLatvijaLatviešuLatvianLietuvaLietuviųLithuanianMoldovaMoldoveneascăMoldavianБеларусьБеларускiBelarusian
Transcaucasia
ԱրմենիաՀայերենArmenianАҧсныАҧсышәалаAbkhazХуссар ИрыстонИронауОssetianსაქართველოქართულიGeorgianAzərbaycanАzərbaycancaAzerbaijani
Middle East
Sputnik عربيArabicArabicTürkiyeTürkçeTurkishSputnik ایرانPersianPersianSputnik افغانستانDariDari
Central Asia
ҚазақстанҚазақ тіліKazakhКыргызстанКыргызчаKyrgyzOʻzbekistonЎзбекчаUzbekТоҷикистонТоҷикӣTajik
East & Southeast Asia
Việt NamTiếng ViệtVietnamese日本日本語Japanese俄罗斯卫星通讯社中文（简体）Chinese (simplified)俄罗斯卫星通讯社中文（繁体）Chinese (traditional)
South America
BrasilPortuguêsPortuguese
NewsfeedBreaking
06:48 GMTScania Scandal: Swedish Carmaker Investigated for Bribery Over Deal With Indian Minister
06:37 GMT25 Injured After Explosion in Residential Building in Gothenburg, Sweden, Reports Say
06:13 GMTGerman Chancellor Candidates in Focus as Tough Coalition Talks Loom
05:53 GMTBrexit to Blame: Germany's Olaf Scholz Says 'End to Freedom of Movement' Fueled UK Petrol Crisis
05:37 GMTUK Motorist Runs Over 'Knife-Wielding' Man Amid Alleged Petrol Dispute - Video
05:23 GMTPatriarchy Strikes Back? Iceland's Historic Female-Majority Parliament Up in Smoke After Recount
04:43 GMTUS Marine Colonel Put in Brig For ‘Asking for Accountability’ Over US Departure From Afghanistan
04:03 GMTWitness Who Claims She Saw Prince Andrew Dancing With Giuffre at Club to Testify in Court - Report
03:24 GMTBennett Claims He Said 'No Three Times’ to President Biden During Their August Meeting
03:16 GMTRepublicans Slam DHS Chief Mayorkas for Allowing Thousands of Haitians Into US
01:37 GMTUS ‘Humiliated Like Never Before’, Trump Says, After DHS Allowed Thousands of Migrants to Pour in
01:31 GMTLockheed Martin to Build US Army’s Next Generation Tactical Vehicle Based System
01:10 GMTBorder Patrol Agents Disgruntled Over Biden's Attempts to Throw Them 'Under the Bus' - Report
00:53 GMTBeard-Check: Afghan Barbers Banned From Shaving, Trimming Beards - Reports
00:27 GMTR. Kelly Found Guilty: Will Artist Be Removed From Music Services?
00:03 GMTIs Sir Alex Ferguson Right, That Ronaldo, and not Messi, Could Score a Hat-trick for Anyone?
00:00 GMTUS Senator Menendez Urges New Sanctions on Turkey if It Acquires More Russian Weapons
YesterdayInsurgents Who Detained President of Guinea Declare Transitional Charter - Reports
YesterdayTexas Lawmakers Propose New Congressional Districts in Cities of Austin, Houston
YesterdayIOM Looking for Alternatives for Haitians at US Border, Brazil Being 1 Option - Sources