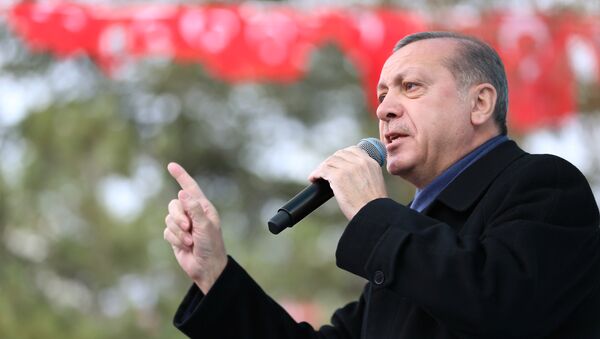 Turkish President Recep Tayyip Erdogan expressed hope on Tuesday for a new era in Syria and Iraq after talks with Russian and US presidents, Vladimir Putin and Donald Trump, respectively.

"The [Turkish operation in Syria] Euphrates Shield was a success. We eliminated Islamic State [Daesh] there. Manbij and Raqqa are next. I want us to achieve a good result there as well. President Putin and I shall discuss this during our meeting. Then I have a visit to the United States on May 16. If we are able to launch a new process, I think we shall thereby take steps for a new era in Syria, as well as in Iraq," Erdogan said, speaking to the parliamentary faction of the ruling party.

Merkel's Visit to Russia a Trump Card in Upcoming Election
Putin and Trump held two phone conversations since the US leader assumed office in January. The first talk followed Trump's inauguration, while the second phone call took place in early April after a terror attack in St. Petersburg.

The relations between Russia and the United States became strained after US strike on Syria.

On April 4, the National Coalition for Syrian Revolutionary and Opposition Forces blamed the Syrian government for the alleged chemical weapons attack in Khan Sheikhoun. Damascus denied any involvement in the Idlib incident and the Syrian army said it did not possess chemical weapons as they were destroyed by the Organization for the Prohibition of Chemical Weapons (OPCW).

On April 6, the United States conducted a missile strike against the Syrian government's Ash Sha'irat airbase in the Idlib province. Trump claimed that the strike was a response to the alleged chemical weapon attack in Idlib, an incident which the White House blames on Damascus without providing evidence.