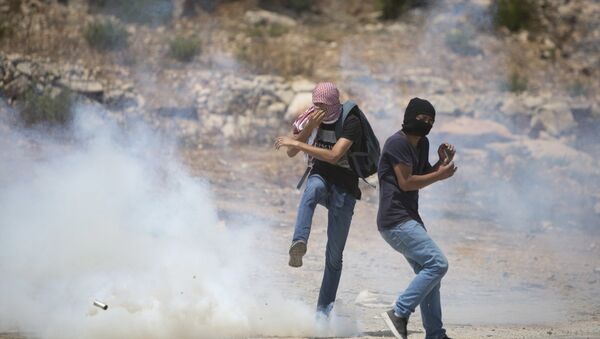 © AP Photo / Majdi Mohammed
Subscribe
Of the estimated 2000 Palestinian prisoners in Israeli jails who began a hunger strike two weeks ago, a reported 300, according to Israeli state sources, have chosen to resume eating, while the remaining group continues their protest.

Israeli Minister of Public Security Gilad Erdan claimed on Sunday that 300 Palestinian prisoners in Israeli jails protesting poor conditions and what is widely considered to be an ongoing form of apartheid system by Israel against Palestine, have returned to eating, while the remaining number continues their hunger strike.

Palestinian authorities dispute the total number of prisoners participating in the hunger strike, which began on April 16, placing the number above 2000.

On Sunday, Erdan made a special announcement claiming that 300 of the Palestinian hunger strikers had ended their fast, and asserted that only 920 were continuing the hunger strike.

Erdan stated that Jerusalem would not accede to or even acknowledge the demands of the hunger strikers.

"Negotiations are out of the question," he remarked, according to the Times of Israel.

Speaking to Jerusalem's Army Radio, owned by the Israel Defense Forces, Erdan asserted that 300 hunger strikers have "agreed to take food without having obtained" any of their demands.

The Israeli Public Minister offered that four special centers within the Israeli prison system were being created to avoid having to transfer to hospitals those prisoners requiring care as a result of their hunger strike.

The prisoners are said to be on a diet of water and salt, protesting prison conditions and calling for an end to the illegal occupation of Palestinian territory seized by Israel, as well as an end to the oppressive living conditions placed upon Palestinians by Jerusalem.

Palestine seeks the diplomatic recognition of their sovereign state, following a 2012 UN resolution in which an overwhelming majority of members voted to acknowledge the existence of the country.