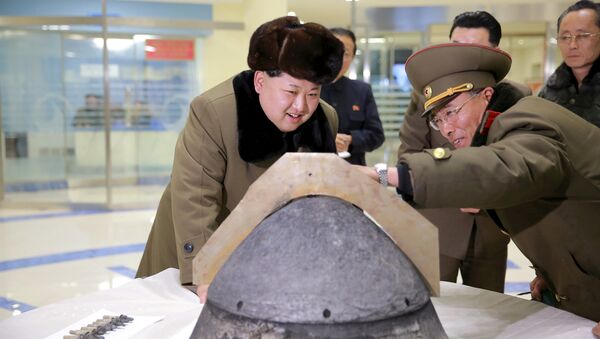 North Korea test-fired a ballistic missile on Friday night but the missile exploded soon after launch. The latest test closely watched by the US and Japan, added a new twist to the rising tensions on the divided peninsula.

North Korea Crisis: Pyongyang's Latest Ballistic Missile Test Ends in Failure
"Despite strong warnings by the international community, North Korea today went through its ballistic missile launch. It is a grave threat to our country. This is absolutely not acceptable. We strongly condemn such acts," Abe told reporters in London on Saturday.

Russia too was keeping a close eye on the flight of the North Korean missile, which, in case of malfunction, might change course and head toward Russian territory.

“Russia is extremely attentive about what is going on in North Korea and controls the airspace in the zone of its responsibility,” Senator Viktor Ozerov told Sputnik.

Meanwhile, Dave Benham, a spokesman for the United States Pacific Command, said that the launch took place at 10 p.m. GMT and that the missile “did not leave North Korean territory.”

He added that even though the missile posed no threat to US security, Washington remained firmly committed to guaranteeing the security of its South Korean and Japanese allies.

The North Korean missile launch could have been a warning signal to the US aircraft carrier USS Carl Vinson, dispatched to the Sea of Japan for a joint drill with the South Korean Navy.

Another reason for Friday’s missile launch could be the upcoming May 9 presidential election in South Korea.

Friday’s missile launch came hours after a meeting held by the UN Security Council where US, Japanese and South Korean foreign ministers unanimously slammed Pyongyang for pushing ahead with its nuclear and missile program.

Chinese Foreign Minister Wang Yi underscored the need for a political solution to the problem.

Russia’s Deputy Foreign Minister Gennady Gatilov criticized Pyongyang’s “provocative nuclear-missile activity” and urged Washington and Seoul to reconsider their decision to deploy THAAD missiles in South Korea, which he described as an “additional destabilizing factor in the region.”

The United States could use Friday’s missile launch as a pretext for toughening sanctions against North Korea, which celebrated the anniversary of its Armed Forces with the biggest live fire artillery drill in its history.

Trump Claims North Korea 'Disrespected China' by Firing Off Ballistic Missile
On Friday US Secretary of State Rex Tillerson urged members of the UN Security Council to adopt additional sanctions toward the nuclear threat posed by North Korea against Japan and South Korea.

He also called on Tokyo and Seoul to either downgrade their diplomatic ties with Pyongyang or break them off altogether.

In Washington President Trump said that North Korea's missile launch could be seen as an insult to China.

"North Korea disrespected the wishes of China & its highly respected President when it launched, though unsuccessfully, a missile today. Bad!" Trump tweeted on Friday.

The US fears that within the next 10 years North Korea could develop nuclear-tipped intercontinental ballistic missiles capable of reaching US territory. According to Pentagon experts, Pyongyang is capable of building a small nuclear warhead for its medium-range ballistic missiles.
America’s worst nightmare

In an interview with the online paper Vzglyad, Moscow-based military expert Vladimir Khrustalev  said that nuclear missile capability was Pyongyang’s only deterrence against outside aggression.

“This [capability] is the worst nightmare for the US, South Korea and Japan because from the caning boy North Korea once was it is now turning into an adversary no one can attack with impunity,” Khrustalev said.

As for Russia and China, he added that they need a North Korea which, on the one hand, is capable of discouraging any Mid-Eastern-style military adventure by the US or its allies and, on the other, is not strong enough to tip the existing global nuclear balance.