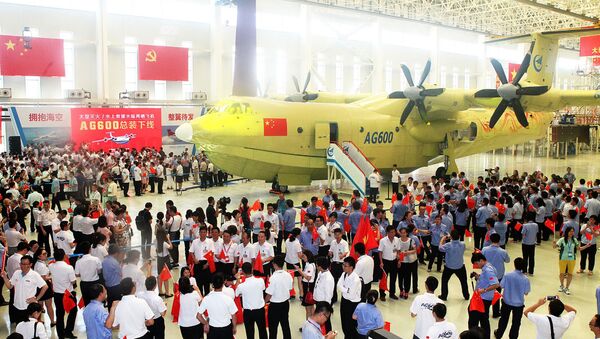 The world’s largest amphibious aircraft, the Chinese-made AG600 has successfully conducted its first ever taxiing on a runway.

The ground test was held in Zhuhai City, Guangdong Province. During taxiing, the aircraft's braking system was evaluated and its ability to stay in a straight line was tested, Xinhua News Agency reported.

The video shows the AG600 making a 180-degree turn on the runway. It was reported that all the systems were functioning properly.

Earlier, it was reported that the Chinese-made aircraft had passed engine tests and is expected to make its maiden flight in the first half of this year, according to Xinhua.

It was noted that the first test flight from the ground would take place in May and from the water during the second half of 2017.

It was reported that the AVIC has received an order for 17 aircraft. However, the price has not been disclosed yet.

The 37-meter-long plane with a wingspan of 38.8 meters is about the size of a Boeing 737. It is meant to support emergency response efforts.

The aircraft has a maximum takeoff weight of 53.5 tons and can collect 12 tons of water in 20 seconds.

The crew of the AG600 will consist of three people who will be selected from the eight applicants currently undergoing training.