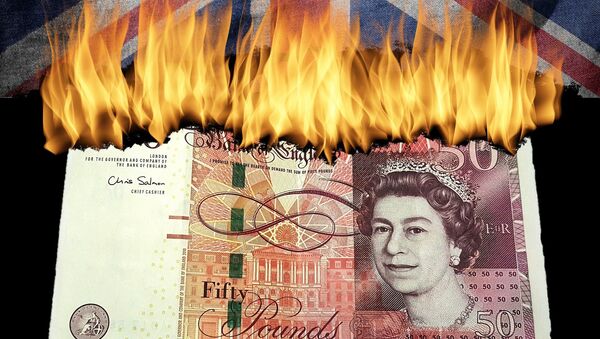 CC0 / PIxabay /
Subscribe
The British economy slowed to below forecasts in the first quarter as higher inflation held back the expansion in the services sector, whilst the gains in manufacturing and exports are still being not strong enough to fully offset the disappointing GDP dynamics.

UK Economy to Accelerate This Year in the Wake of Snap Election
Kristian Rouz — UK economic growth unexpectedly slowed in the first quarter, as higher post-Brexit vote inflation affected consumer spending, holding down the expansion in of the services sector. Higher inflation has mainly been a result of the decline in the pound sterling's FX rate, rendering imported goods dearer, critical to such an imports-reliant nation as the UK.

In order to overcome further slowdown, Britain needs higher central bank interest rates, whilst looser fiscal policy in the form of higher budget spending would support household consumption. These policy measures will be subject to political discussion in the coming month, as the snap elections will be held on June 7.

UK GDP growth suddenly dropped to 0.3 percentpc in 1Q17 as a result of higher prices that impaired consumer spending. Household consumption drives roughly 79 percentpc oif the UK economy, and in order to ensure a steady economic growth, boosting effective disposable incomes is the most important task that the HM cabinet is facing. The Bank of England (BOE), on its part, must tackle inflation, holding it within the 2 —percent gauge by adjusting monetary policies accordingly.

The Office for National Statistics (ONS) said that slower retail sales, and declines in consumer spending on transportation and hospitality services were the main factors behind the Q1 slowdown. The pound sterling, which had dropped to as low as $1.20 from its usual gauge of $1.40-1.60 following the Brexit vote, contributed to higher inflation in the beginning of the year. Yet, the sterling has appreciated to $1.29 since then, easing current inflation expectations somewhat.

"Slower growth of consumer spending and investment uncertainty following the referendum vote are acting as a drag on UK GDP, despite a reasonably buoyant global economy," Andrew Sentence of PwC said.

Previous expectations of the Q1 UK growth stood at 0.4 percentpc, with analysts having expected the negative effects of higher inflation on domestic consumption to be milder. UK economic growth in the last quarter of 2016 was 0.7 percentpc.

The inflation-motivated deceleration in the services sector affected the GDP, but gains in manufacturing made the situation less alarming. In Q1, UK services slowed to 0.3 percentpc from 0.8 percentpc the previous quarter, and a broader economic slowdown was slightly less dramatic.

German Finance Minister Tells UK to Expect No 'Free Lunch' During Brexit Talks
"The long-awaited slowdown is finally coming but I'd be wary of over-interpreting today's numbers," Ian Stewart of Deloitte said. "Quarterly GDP growth is choppy and prone to revision. Inflation will continue to squeeze the consumer but the outlook for manufacturing and exports has brightened."

The recent revaluation of the pound sterling suggests that the increase in inflation is likely temporary, besides, the BOE can afford to increase base borrowing costs from the current historically low of 0.25 percentpc up to 0.5 percentpc. Yet, such a move would have to coincide with a coherent action on the fiscal policy side, and the government will not be able to increase budget spending until after the 7 June 7 election.

UK manufacturing and construction, on their part, are now positioned for a quicker expansion in the medium-term. UK goods and services are becoming increasingly competitive in the overseas markets, partially due to the still-weak pound sterling, and the narrowing trade deficit will likely contribute to a quicker pace of economic expansion in the second quarter.

The BOE policymakers, on their part, see the UK economy accelerating e this year without monetary policy adjustment, as rising business investments and buoyant exports will stave off the risks produced by the cooling in consumer spending. The International Monetary Fund (IMF) expects the British economy to expand by 2 percentpc this year.

"While the deceleration looks a little scary… the expansion is entering its eighth year and the labour market is at full employment," Kallum Pickering of Hamburg-based Berenberg Bank said.

According to Berenberg Bank projections, in the coming years the UK economy will be growing at 1.8 percentpc per year as a consequence of Brexit, instead of 2.2 percentpc annual growth had Brexit not been happeneding.

Brexit’s Negative Impact on UK Economy Unchanged Despite 1.4% Growth in 2017
UK manufacturing, meanwhile, rose by 0.5 percentpc in the first quarter due to the an increase in motor vehicle production, the ONS said. This reflects the positive post-Brexit dynamics across the UK industrial sector, and suggests thate British exports are poised to gradually increase.

Still, with the Exchequer having recently enjoyed a windfall in tax receipts, it could affords a limited fiscal stimulus in order to at least stave off a possible Q2 deceleration could be afforded, but a full-scale fiscal stimulus package would still be required after the 7 June 7 election clears the political perspective. The British consumers are also affected, aside of the post-Brexit surge in inflation, by the years of austerity (low budget spending), which have undermined THE average purchasing power in the UK.

A reversal of austerity and a normalizsation in monetary policies could, therefore, help boost economic growth in the near termin the near-term. However, an unlikely Labour victory at the election would put economic growth at higher risk due to the entailing policy uncertainty.