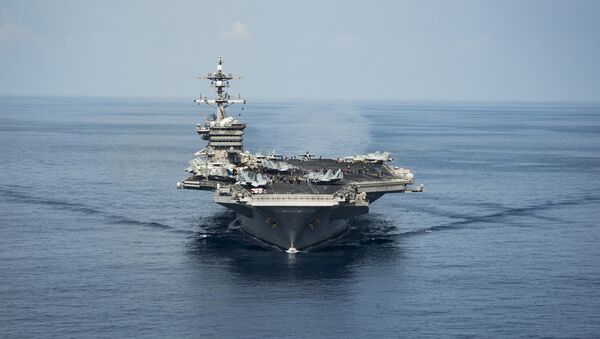 World
Japan Conducts Joint Drills With US Carrier Strike Group in Pacific Ocean
TOKYO (Sputnik) — Earlier on Saturday, Pyongyang launched a suspected intermediate-range ballistic missile from a site north of the country's capital. Japan, South Korea and the United States said the test appeared to have failed as the missile broke up within North Korean territory.

"South Korea and U.S. strike forces began a drill in the East Sea from 6 p.m. [09:00 GMT] today against the backdrop of the current security situation… It is aimed at deterring North Korea's provocations and strengthening the military readiness of the Korea-U.S. alliance," the South Korean Navy said, as quoted by the Yonhap news agency.

On Tuesday, South Korea conducted joint military exercises with the United States in the Yellow Sea while Pyongyang on the same day carried out a massive firing drills in the eastern port of Wonsan in celebration of the 85th founding anniversary of the country's military. The US Navy also carried out drills with Japanese naval forces this week.

The situation on the Korean peninsula aggravated since North Korea carried out a number of missile launches and nuclear tests in recent months. In response to the escalation of the situation in the region, the United States sent a naval group led by US aircraft carrier Carl Vinson to the Korean Peninsula.