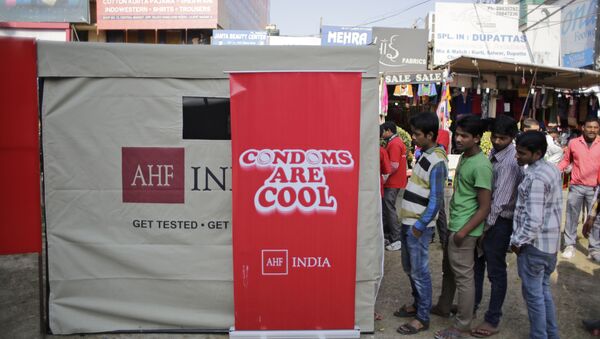 The AIDS Healthcare Foundation (AHF), a global civil society organization, is launching a unique initiative to enable Indians to buy or order condoms either through phone or email to get delivery at their doorstep. The initiative called Love Condoms, seeks to spread the use of condoms in India.

Indians Take to Online Route for Info on Sex, Sexual Health
New Delhi (Sputnik) — Many past surveys conducted in India concluded that deep-seated social taboos associated with openly talking about sex or expressing sexual desires prevent people especially sex workers and other vulnerable groups from purchasing condoms at pharmacy stores. India has 2.1 million people with HIV, according to UN estimates.

The Indian government has launched numerous schemes to distribute condoms for free through its health centers but that too hasn't yielded successful results. The quality of condoms and in recent months, their availability due to a lack of funds is a major issue.

"The funding for condoms is bad, it's being cut around the world. We were getting desperate requests and it's then we realized India needs its own condom store. Condoms are the cheapest and the best way to prevent HIV infection so we were very upset about it (funding cuts)," AFP quoted Terri Ford, chief of global advocacy and policy at AHF, as saying.

"Both affordability and accessibility are twin challenges Indians face in the fight against AIDS, especially in villages. Taboos associated with buying condoms in a country like India where a majority of the people even hesitate to approach a shop complicate matters. It will truly help if condoms will be easily available across the country. Besides, creating awareness about these issues is important and many civil society organizations are coming forward and working in the area. India has seen a lot of improvement in the fight against AIDS. But I also believe that the government must also discuss these issues and work together with the private sector in creating awareness against AIDS," Paul Lhungdim, President, The Delhi Network of Positive People, an NGO, told Sputnik.