Playing the Long Game: Russia, EU Should Brace for 'Decades Worth of Sanctions' 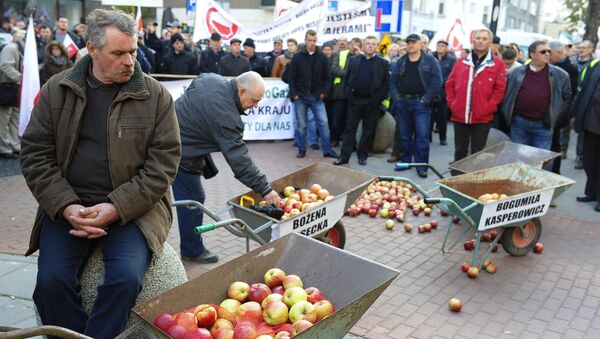 The sanctions introduced by the United States and Europe against Russia in 2014 in the wake of the crisis in Ukraine has had some impact on the Russian economy, but Moscow proved able to turn around and use restrictions to its advantage, writes Austria's Die Presse. Europe, on the other hand, is the only clear loser, according to the newspaper.

Analyzing the impact of the West's anti-Russian sanctions, which have been in force for over three years now, on the Russian economy, experts speaking to the newspaper stressed that the restrictions haven't worked, bringing major financial loses to the EU while the Russian government has found ways to take advantage of the situation.

Adding insult to injury, Russian officials have calculated that Western restrictions have had almost no impact on the Russian economy. Last week, Russian ex-finance minister Alexei Kudrin said that while the sanctions may have had some negative impact, Russia's recession over the past two years was caused almost exclusively by falling oil prices, with sanctions not only failing to have a significant impact, but even strengthening some sectors.

Russia Effectively Shields Population From Sanctions' Effect - UN Rapporteur
Business experts observed that Russian companies' main complaint has been that sanctions limit access to Western capital markets, which has put limits on their development prospects. Nevertheless, more important factors, including the fall in oil prices, complications in relations with the West and the subsequent loss of investments, and the devaluation of the ruble, have had a much more significant impact than the restrictions. Die Presse cited the World Bank's estimate that sanctions cost Moscow the equivalent of 0.5% its GDP. (Russia's GDP contracted by 3.8% in 2015, and grew by 0.3% in 2016).

At the same time, a number of industries, first and foremost agriculture, have only benefited from the sanctions, Russia's agricultural countersanctions, and the weaker ruble, engaging in import substitution at home and even expanding their market share abroad. Die Presse recalled that sanctions and the government's policy supporting agriculture saw the sector grow by 2.2% in 2015, and 4.8% in 2016, with nearly a dozen businessmen from the agricultural sector making their way onto the Forbes list of 200 wealthiest Russians.

Die Presse pointed out that Russian consumers have been negatively impacted by the sanctions – with the quality of local production often inferior to imports. Still, the restrictions have seen the active growth in Russian analogues to Western goods, not only in agriculture, but computer software, the aviation industry, etc., and quality is improving. In other words, Russia has found ways to benefit from the restrictions.

Die Presse emphasized that "only the West clearly lost in the material sense." Citing a study by the Austrian Economic Research Institute from late 2016, EU countries lost about 40 billion euros in export earnings, costing them about 900,000 jobs, in 2015 alone. Austria, the paper added, lost about 1.5 billion euros, including about 20,000 jobs, in the same period.

On the one hand, Koptelev noted, sanctions have limited Russian companies' access to foreign capital, as well as technologies, which may have negative effects both in the short and medium term. On the other hand, Russia's countersanctions policy has given impetus to the growth of domestic industries, particularly agriculture, not only in terms of raw production, but processing as well. In some sectors, Russian firms have begun completely replacing imports.

Of course, there definitely remains room for improvement, the expert stressed, particularly in the areas of innovation and high tech industries, where Russian companies continue to show limited potential on the world market, with the exception of the arms industry.

For his part, independent financial analyst Dmitri Adamidov told Expert that both sides have faced losses from the sanctions, but they did not lead to the effect that Washington and Brussels hoped for (which was to get Moscow to reverse its policy positions, including on the crisis in Ukraine). Furthermore, the expert stressed that Russia's traditional trade partners, including Austria, suffered much more significantly from the restrictions, hence the appearance of these kinds of articles in the Austrian media.

Speaking With Russia From Position of Strength is 'Hopeless' - Intel Chief
Ultimately, Expert emphasized that for better or for worse, "it's necessary to remember that little depends on the views of Europe as a whole, and even less on some European countries individually, on [the sanctions] issue. Therefore, restrictions will remain in place for a long time yet. Furthermore, Russia's Western partners will attempt to put a hefty price tag to get them lifted."

Indeed, Adamidov recalled that the story surrounding sanctions against Iran lasted for decades (with the final phase aimed at getting them lifted stretching out for over 15 years). This same situation could be repeated in the case of Russia, he said.

If that's the case, it follows that Moscow must prepare accordingly.