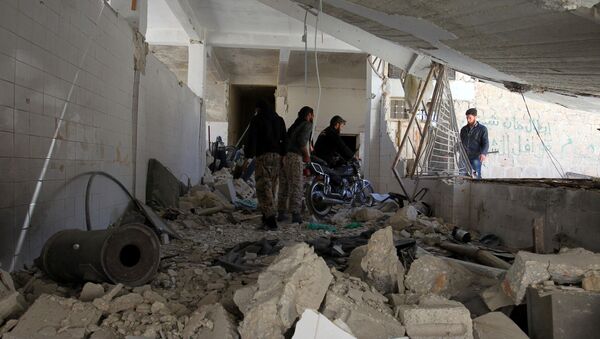 © REUTERS / Ammar Abdullah
Subscribe
On Thursday, the Russian Foreign Ministry questioned the findings of a French report into the alleged chemical attack in Syria's Idlib province. Radio Sputnik discussed the issue with Russian political scientist Alexei Gusev, who said that the report looks very much like a political "put-up job."

Russia Insists on Sending OPCW Mission to Idlib Chemical Incident Site ASAP
On Thursday, the Russian Foreign Ministry commented on the findings of the French report on the alleged chemical attack in Syria's Idlib province.

"France is the third country after Turkey and Britain to have conducted a probe into the chemical attack. The impression is that the above countries either do not trust the OPCW (Organization for the Prohibition of Chemical Weapons) or are trying to steer its investigation in a particular direction," says the statement on its website.

"Even the initial analysis of the five-page French document has raised quite a few questions. First, it begs the question as to the circumstances under which France has obtained samples that it claims were taken directly at the scene of the incident. If they were taken by the French intelligence services themselves, it means they have free access to an area controlled, according to the report, by the armed groups of Syrian opposition forces linked to al-Qaeda. If the samples were obtained from a different site located, for example, on the territory of one of Syria’s neighbors, the credibility of the analysis carried out by France would immediately be called into question," it further explains.

"In short, there are many obvious discrepancies which testify to the poor quality of the investigation. The only real possibility of establishing the truth would be to send the OPCW fact-finding mission to Khan Shaykhun and the Shayrat Airbase, where sarin gas that was used in Khan Shaykhun was allegedly stored, to conduct a field investigation, using all the procedures provided for in the Chemical Weapons Convention and this mission’s mandate," it suggests.

The French report concluded that only President Bashar Assad or members of his inner circle could have ordered the strike on the town of Khan Shaykhun in Idlib province.

The document claims its conclusions are based on samples obtained from the impact strike on the ground and a blood sample from a victim.
According to the French report, the new sample was compared to another one of questionable integrity; this time obtained from a 2013 attack, in which an intact, unexploded “hand grenade” containing 100 milliliters of sarin was allegedly dropped from a government helicopter.

Radio Sputnik discussed the issue with Russian political scientist Alexei Gusev, who said that the report looks very much as a political "put-up job."

Numerous inconsistencies in the French report raise strong doubts about the quality of the investigation they carried out, he told Sputnik.

"The French intelligence not only 'confirmed' the conclusions of their Turkish and British counterparts but have also found 'completely new evidence' of the use of a chemical weapon in Idlib. It is very strange to hear it from the intelligence services. It can't imagine how one can fill a hand grenade with sarin and then drop it from a helicopter. It is some brand-new technique," he said.

The political scientist further suggested that the reports by French, Turkish and British intelligence agencies amount to a kind of political "put-up job."

"The thing is that the UK, Turkey and France are all members of the US-led coalition which is operating in Syria and Iraq. And the intelligence services of these three countries are trying to collect evidence to prove that the plotter of the Idlib attack is the government army of President Assad.  However even a blind man will see that it is just too far-fetched," he concluded.