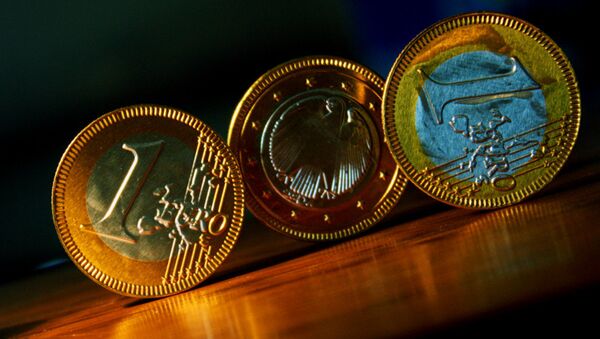 © Flickr
Subscribe
International
India
Africa
Despite the uncertainty stemming from the French election, which has kept Eurozone investors in check, first quarter economic growth was solid across the bloc, and the recent acceleration in core inflation supports the view of the economy getting back on track again.

ECB to Keep Pumping Money While Greek , Italian Woes Threaten Eurozone
The ECB might consider a sooner normalization of their monetary policies by removing the bond-buying program and raising base borrowing costs. However, the Eurozone’s monetary authorities are likely to abstain from decisive action until after the elections in France and Germany in May and September, respectively, are over, clearing the political perspective.

According to a Friday report from Eurostat, the Eurozone’s core inflation measure rose to 1.9pc year-on-year in April from 1.5pc the previous month, reflecting the acceleration of consumer demand and gains in factory input and output costs. The April reading beat earlier expectations, and as inflation is now almost in line with the ECB target, the cost of credit is poised to go up in the near-term.

The main driver behind the Eurozone’s inflation has been the recent surge in crude oil prices, driving factory input costs. In April, energy costs rose by 7.5pc year-on-year, whereas last April annualized energy costs had slumped by 8.7pc. The rebound in other raw material prices also contributed to gains in the core price index. On the other hand, still ultra-affordable credit is driving consumer demand, which is also surging amid the gradually-improving labor market.

"The April/March swings in Eurozone consumer price inflation – both the headline rate and the core rate — were influenced substantially by pricing distortions, resulting from the fact that Easter occurred in mid-April in 2017 compared to late March in 2016," Howard Archer of HIS Markit said.

In February, however, Eurozone core inflation had hit the ECB’s targeted 2pc, but pulled back in March. However, inflation fluctuations just around the central bank target are an indications of solidifying economic growth.

The ECB, however, is unlikely to immediately react to the upbeat data with a policy response. On Thursday, ECB President Mario Draghi warned investors to not anticipate any monetary policy tightening yet, because the surge in inflation might not be sustainable.

In a separate report, the European Commission said their Economic Sentiment Indicator, a key forward-looking measure of the Eurozone's business and consumer confidence, advanced to 109.6 in April from 108 the previous month, hitting its highest since pre-crisis August 2007. The manufacturing sector reported its best sentiment since the 2011 debt crisis, and levels of investment are now expected to rise by 5pc this year compared to the 3pc anticipated after the Commission last measured economic sentiment in November.

Eurozone Crisis: 'Extend and Pretend Game' Cannot Last
Both the gains in inflation and the continued increase in economic confidence across the Eurozone put investors’ main focus on the June policy meeting at the ECB. The monetary authorities might then provide more details on the tapering of their bond-buying program, as well as interest rates.

The meeting will also take place after the momentous French election, which might result in France leaving the Eurozone and the EU altogether.

A separate report from France showed that the French economy had slowed down in the first quarter to 0.3pc from 0.5-percent growth in 4Q16, with consumer spending easing in the beginning of this year, undermined by the high unemployment.

"It is very interesting to see what growth means for inflation, particularly for core inflation, which has been quite stable recently," Daniel Lenz of DZ Bank said. "In spring, you have talks between employers and unions in many Eurozone countries and if we have pay rises after years of stagnation in salaries, there could be a sharp upward move (in core prices index)."

The French election, however, is holding back the gains in stock markets and increases in the Eurozone bond yields, as the perspective of Frexit in currently one of the major factors of economic uncertainty. Nonetheless, despite investor cautiousness, the Eurozone is on course for a gradual acceleration of its GDP growth, as the manufacturing component is becoming increasingly prominent.