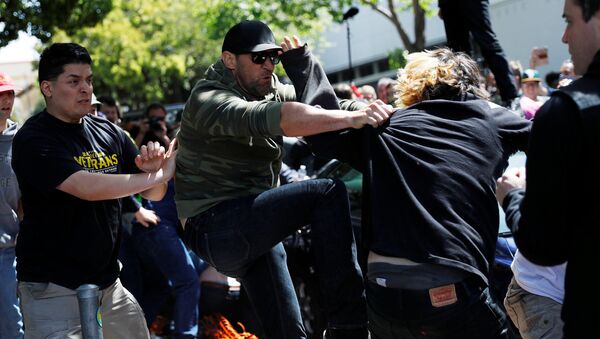 Conservative media personality Ann Coulter scrapped plans to exercise her right to free speech at the campus of the University of California, Berkeley, but protesters both for and against her appearance have clashed there nonetheless.

“The police have basically said there is going to be violence, which is an odd thing for police to say since they are supposed to stop violence,” former lead investigative reporter at Breitbart and current Sputnik Radio host Lee Stranahan told Sputnik’s Fault Lines.

Extremists on both sides of the ideological spectrum seem to prepare for violence every time they face off these days, though Thursday’s gathering has so far been less violent than some.

Coulter is known as a firebrand right-winger who has accrued a national following.

Earlier on Thursday, two individuals on Berkeley’s campus were arrested. It is not known whether they are formally affiliated with the school.

“Historically, the Berkeley College Republicans have been treated pretty well by the university … until the recent election, which was the turning point,” said Harmeet Dhillan of the RNC National Committee. Since the election, two big things have happened in California’s political landscape, Dhillan told Fault Lines. Rhetoric in San Francisco and its across-the-bay neighbor, Berkeley, “has become toxic and intolerant,” she said. Further, Berkeley’s new mayor has sided with groups like Antifa, which she nicknamed “anti-First Amendment.”

​Campus police have vowed to keep a “highly visible presence” on Thursday due to threats of violence.

“Many of the individuals and organizations which planned to protest Ann Coulter’s appearance or support it still intend to come to campus,” a university spokesman said.

​In February, former Breitbart editor Milo Yiannopolous was slated to speak at Berkeley, but vandalism, fires and demonstrator clashes with police forced event organizers to call it off. In the following months, tensions have done anything but die down. Far-right and far-left groups have been implicated in multiple violent confrontations.

​On Tuesday, student organizers filed a suit against UC Berkeley for snuffing out freedom of speech.