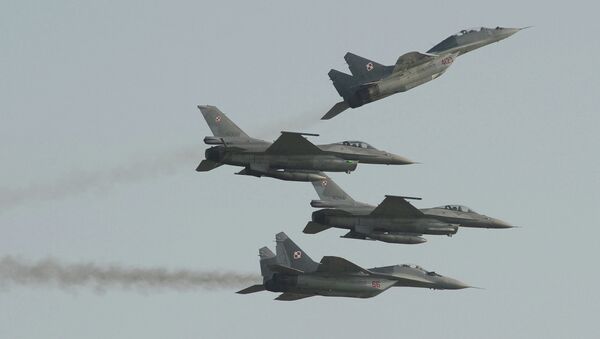 © AP Photo / Alik Keplicz
Subscribe
In an effort to upgrade its air force and to bolster the nation’s military, Poland is considering the possibility of replacing its aging fleet of Soviet military aircraft with US-manufactured warplanes.

US Army Prepares to Move More Firepower Into Poland
According to RIA Novosti, the Polish military seeks to do away with the Su-22 and MiG-29 military aircraft currently employed by Poland’s Air Force, and has currently set its eyes on theF-16 and F-35 multirole fighters, which may eventually replace the aging Soviet planes.

Polish Deputy Defense Minister Bartosz Kownacki said that the condition of the Polish Air Force is "satisfactory" as compared to the other branches of Polish Armed Forces.  Italy has a total of 48 single- and twin-seat modifications of F-16, though it believes that this quantity is not enough.

"Old Su-22 and MiG-29 aircraft must be replaced with the next generation planes. But the Defense Ministry is still deciding whether it will be an F-16 or other types of aircraft, like the F-35," he said.

Kownacki added that from 2030 Poland intends to increase its defense spending from its current level of 2 percent of the country’s GDP to 2.5 percent.

Earlier in April, Polish Defense Minister Antoni Macierewicz also announced that the number of Polish army personnel is likely to be increased from its current 129,000 up to 200,000 servicemen after a three to five year period.