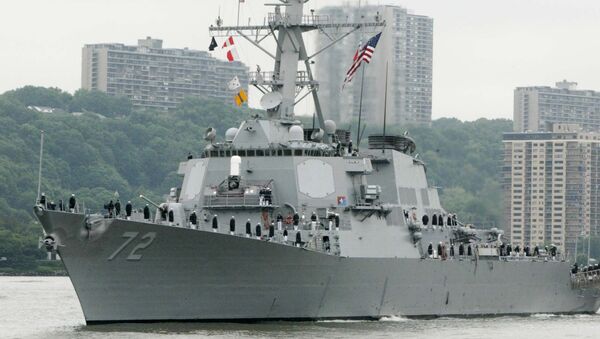 A US Navy destroyer had to alter its course while in the Persian Gulf after an Iranian military vessel approached it within area of 1,000 yards, sources from the US administration said as cited by the US media.

MOSCOW (Sputnik) — The Mahan destroyer of the US Navy had to switch on the danger signal and change its course after it had a close encounter with the Iranian military ship in the Persian Gulf, media reported Tuesday.

The incident took place on Monday, after the Iranian ship came within area of 1,000 yards from the Mahan destroyer with its weapons manned, the US ship changed its course and fired flares, manning its own weapons, two US officials told the Fox News broadcaster.

As a result, the Iranian ship did not come closer than 1,000 yards to the Mahan after the danger signal by the US ship was switched, according to the broadcaster.

The incident is the latest of several confrontations between US and Iranian vessels around the Persian Gulf. In January,  the Mahan destroyer fired warning shots at the Iranian Revolutionary Guard boats to stop before firing warning flares and a smoke float, according to media reports.

Iranian Vessel Points Weapon at US Helicopter Over International Waters
In March, the USNS Invincible experienced a close encounter with high-speed attack ships deployed by the Iranian Revolutionary Guard, ultimately compelling the US spy ship to alter her course.