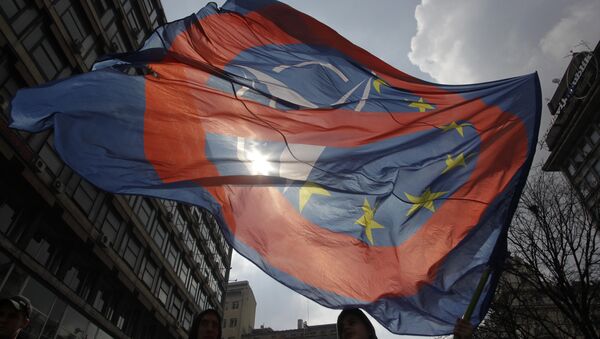 "As for our relations with Montenegro, we have good relations with this country, we respect its choice. They are [seeking accession to NATO] in the interests of their people. Serbia has an independent policy and remains a militarily neutral state. It does not want to join military alliances, remaining the guarantor of security," Djordjevic said.

Trump's Welcome to 'Criminal' NATO Can't Erase Montenegro's Memory of Bombings
Montenegro was invited to join NATO on December 2, 2015, in the alliance's first expansion into Eastern Europe in six years. Podgorica accepted the invitation the following day, a motion which triggered protests in the Balkan nation. In May 2016, the alliance members signed a protocol on Montenegro's accession to be ratified by all NATO member states before becoming a full-fledged member. On April 11, US President Donald Trump signed the protocol on Montenegro’s accession to NATO, which was the final step in ratifying the document.

In March, Serbian Prime Minister Alexander Vucic said the country would never seek to join NATO as the alliance had devastated the country and killed its citizens during a 78-day military campaign in 1999 against what was then Yugoslavia, which consisted of Serbia and Montenegro, on the pretext of alleged repressions of Albanians in Kosovo.

Russia Yet to Supply MiG-29s to Serbia

Russia has not delivered its MiG-29 fighter jets to Serbia yet, however, this delivery will certainly take place, Djordjevic said.

"We did not discuss this issue during the meeting [with Russian Defense Minister Sergei Shoigu on Tuesday]… The public will be informed about that. The delivery has not taken place yet, but it will certainly take place," Djordjevic said after a meeting with Shoigu.

In December 2016, Vucic announced that Belgrade was planning to receive six MiG-29s, as well as 30 T-72S and 30 BRDM-2 armored scout vehicles, as part of a Russian military aid package. In late March, a senior Serbian defense official told Sputnik that the agreements between Belgrade and Moscow on delivery of the fighter jets had been signed and their transfer could take place in the next few weeks.

Reports of NATO hindering the delivery of six Russian MiG-29 jets to Serbia were not true, Djordjevic said.

"There are no problems. Have you heard Minister Shoigu or President Vucic or me saying anything about that? There are media reports, which I cannot call serious. We want to comment only on serious information," he said.

Why Buying MiG-29 Fighter Jets From Russia is Exactly What Serbia Needs
The meeting between Djordjevic and Shoigu was held ahead of the VI Moscow Conference on International Security under the aegis of the Russian Defense Ministry scheduled for April 26-27.

Djordjevic told Sputnik that the purchase of Russia's S-300 and S-400 surface-to-air missile systems by Serbia was not discussed during his meeting with Shoigu but that Serbia is still interested having all necessary means to protect its sovereignty.

"We have not discussed precisely this… I would not like to disclose technical details. Serbia has needs in air defense, we have several options for how we would like to protect our sovereignty in the sky. Naturally, we rely on Russia, because we already have a lot of Russian technologies. As for the S-300, S-400 systems, they are very expensive, but we would like to get the best to protect our sovereignty," Djordjevic said.

At the end of December, Vucic said that Serbia was interested in purchasing Russia's S-300 and Buk-M3 air defense systems in the face of increased risks to the Balkan state’s national security.

Djordjevic told Sputnik he discussed the potential for increasing the number of joint Serbian-Russia military drills during his meeting with Shoigu.

"We want to increase the number of our military exercises with Russia and we talked about this [with Shoigu on Tuesday] and discussed our participation in the CSTO [Collective Security Treaty Organization] exercises in Kazakhstan in September and in other conferences, training our people in your advanced training courses. This improves the operational readiness of the Serbian army," Djordjevic said.

The minister added that Belgrade had held eight drills with NATO, two with the United States and two with Russia in 2016.

Serbia Sees No Alternative to NATO-Led Peacekeeping Force in Kosovo

Serbia sees no alternative to the NATO-led international peacekeeping Kosovo Force (KFOR), as it is the only instrument to ensure the security of the Serbs in the Autonomous Province of Kosovo and Metohija, Djordjevic told Sputnik.

"The KFOR is the only guarantor of security for the Serbs in Kosovo and Metohija. All other solutions are unacceptable for us. We are cooperating with KFOR and we want this situation to be preserved," Djordjevic said.

'Kosovo' Project Failed Despite Massive Financial Help From the West
In 1998, an armed conflict broke out between Kosovo Albanian independence supporters and Yugoslavia, as the militias were seeking independence of Kosovo and Metohija. The following year, NATO intervened in the conflict without the UN approval, and started bombing Yugoslavia.

The conflict ended after a UN-backed international intervention. Following NATO’s 78-day air campaign the KFOR was established to support peace in the area and support the international humanitarian effort.

Serbia has no groups currently capable of taking part in international demining operations, however the country will be ready for such mission, including jointly with Russia, by the end of 2018, Djordjevic told Sputnik, adding that Serbia would like to do everything possible to promote lasting peace in the world.

He added that Serbia wants to take part in demining operations together with international forces under the auspices the United Nations and the European Union.

"Serbia would like to do what it can to help bring stability and lasting peace to the world," the minister said.

According to the minister, Russia currently does not need any assistance in demining activities, as the process of demining Syrian Palmyra has already been finished, however, Belgrade is seeking to train its troops in demining, because there are many areas in the country, which need to be demined.

"We did not discuss in principle Serbia's participation in any specific peacekeeping operations with Russia, but I want to note that Serbia would like to make a feasible contribution to the establishment of stability and security in the world. At the moment we are participating in 11 peacekeeping operations, including four under the aegis of the European Union and seven under the aegis of the United Nations," Djordjevic added. 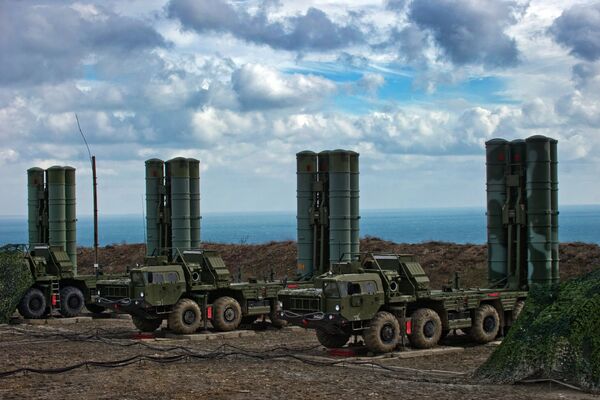