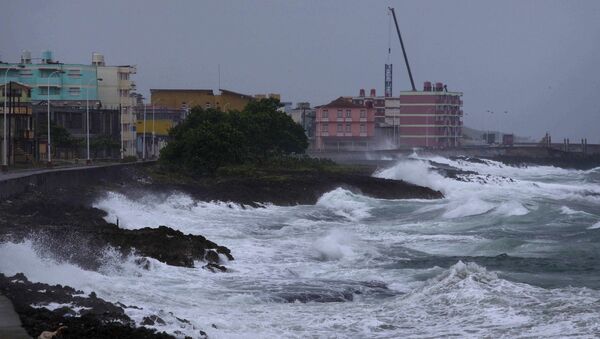 © AP Photo / Ramon Espinosa
Subscribe
Unless humanity moves quickly to limit the effects of global warming brought about by human-induced climate change, sea levels could rise an alarming nine feet within the next 80 years, according to a new study.

By implementing a refined statistical model to study new data detailing the loss of polar and continental ice sheets, an international team of scientists has developed a worst-case scenario involving a worldwide sea level rise of up to nine feet in just 80 years, if widespread moves are not quickly made to limit the effects of global warming.

Published April 3, the study, titled, "A high-end sea level rise probabilistic projection including rapid Antarctic ice sheet mass loss," is a collaboration between the Netherlands' Royal Netherlands Meteorological Institute and its Institute for Marine and Atmospheric Research, as well as the UK's National Oceanography Centre Southampton, and seeks to observe the effects of current carbon dioxide emission rates based on the most up-to-date data.

"Unabated global warming will lead to sea-level rise of many meters — possibly more than 10 meters — within a few centuries, seriously threatening many cities all over the world," stated co-author and scientist Sybren Drijfhout, a professor in Physical Oceanography and Climate Physics at Southampton University.

"It's important for policy-makers and the general public to know what the consequences might be when carbon dioxide emissions are not decreased, especially as there is a severe time-lag between emission-reduction and the sea-level rise response," Drijfhout said, according to Phys.org.

"It might be an unlikely scenario," he acknowledged, "but we can't exclude the possibility of global sea levels rising by more than three meters by the year 2100."

Noting that recent global sea level rise estimates have been based, in part, on the sometimes fallible judgment of climate experts, Drijfhout observed that the new analysis relies solely on cutting-edge climate data involving ocean warming, glacier melt levels, land water storage and the speed with which the Greenland ice sheet is melting, parsed using a new statistical software model.

"This is the first time that robust statistical techniques have been used to develop a scenario like this, whereas previous high-end sea level projections have always been based on subjective expert judgment," he said.

Acknowledging that "the Paris Agreement is only a declaration of intention, and that no adequate measures have yet been agreed to turn these intentions into policy," the new report's authors point out the necessity of legislating international climate protocols immediately.