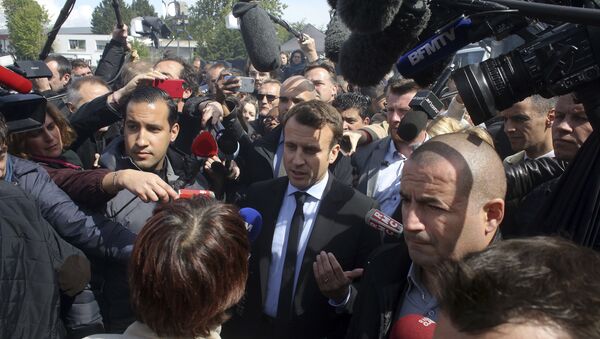 French centrist presidential candidate Emmanuel Macron stated that that he had not arrived to make big promises to a Whirlpool plant, where workers staged a strike, but the candidate did warn Whirlpool employees that if Le Pen was elected president, the factory would surely be shut down.

On Tuesday, media reported that Macron had considered visiting the Amiens city's plant, even though the visit was not included in his official agenda.

According to BFMTV, on his way to meet with representatives from the workers union in the French Chamber of Commerce on Wednesday, Macron decided to make the trip down to the factory where about 60 employees have been striking since Monday against the factory leadership's plan to shift the plant's production to Poland.

"The answer to what is happening to you is not ending globalization and closing the borders, do not be mistaken, those who are telling you that are lying," Macron said as quoted by the outlet referring to Le Pen's election promises regarding stricter border controls.

Le Pen's Chances to Defeat Macron in French Presidential Run-Off Up by 1% - Poll
Macron added that he had not arrived to make big promises, but the candidate did warn Whirlpool employees that if Le Pen was elected president, the factory would surely be shut down.

During Le Pen's unannounced visit to the factory, where she had been met with enthusiasm, she accused Macron of protecting the interests of oligarchs.

According to the French Interior Ministry, Macron won the first round of the presidential election on Sunday with 24.01 percent of the vote, while Le Pen came in second with 21.3 percent. Both candidates will advance into the run-off election on May 7.