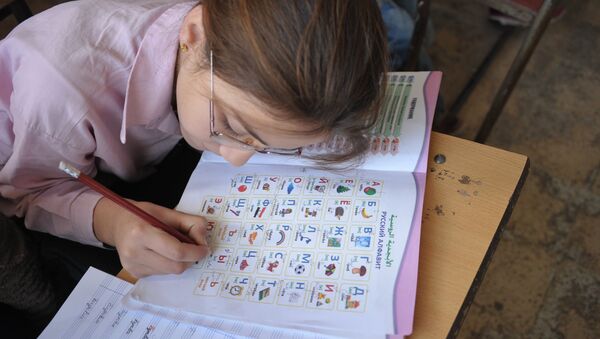 © Sputnik / Dmitriy Vinogradov
/
Go to the photo bank
Subscribe
As an experiment, students in Finland have been given the opportunity to study Russian instead of Swedish, the country's second most-spoken language. The attempt to replace compulsory Swedish with other languages was effectively railroaded by the nationalist Finns Party (formerly known as the True Finns).

'Long-Lost' Finnish Art Masterpiece Found in Russian Museum
The Finns Party's perennial attempts to discard mandatory Swedish education (if only on a trial basis) have been finally given leeway, as the Finnish coalition government has now accepted their attempts. Paradoxically, given the party's wary attitude towards the country's eastern neighbor, this would open more opportunities for students in eastern Finland to study Russian instead of Swedish, which is far less useful in this region given its direct proximity to Russia.

The Finnish government agreed on a one-time trial, where no more than 2,200 students will be able to choose a language other than Swedish, which remains compulsory for historic reasons, as Finland was part of Sweden for over 500 years. The trial is expected to affect no more than 3.7 percent of the corresponding age bracket, Finnish national broadcaster Yle reported.

Sampo Terho, who chairs the Finns' parliamentary faction, called it "a historic moment in Finnish language policy." However, Anna-Maja Henriksson, the leader of the Swedish People's Party, which remains the main defender of the Swedish language in Finland, suggested that Terho's campaigning against the Swedish language was rather driven by his ambition to chair the Finns Party after the resignation of its perennial leader Timo Soini. She also expressed hope that Swedish will retain its strong stance regardless of the experiment.

"We can probably live with this. After all, 3.7 percent is not that bad," Anna-Maja Henriksson said.

Russian Language Study Grows in Finland Despite Sanctions Stand-off
Meanwhile, municipalities in eastern Finland, where Russian is by far the most popular foreign language, have been pushing to make Swedish non-compulsory in recent years. Eastern Finland enjoys a constant flow of tourists from neighboring Leningrad Oblast, the city of St. Petersburg and the Republic of Karelia and is home to an impressive Russian-speaking diaspora. In 2012, the border towns of Lappeenranta and Imatra suggested replacing mandatory Swedish with Russian in order to boost bilateral ties and trade with Russia, which was rejected by the Finnish government. Nevertheless, Imatra Mayor Pertti Lintula stressed the need for professionals with a good command of the Russian language, Yle reported.

In December 2016, a short film protesting mandatory Swedish, made by the Finns' youth wing, sparked outrage in Finland and Sweden. In the film, Finns youth leader Sebastian Tynkkynen was whipped by black-clad figures on the stairs of a landmark Helsinki cathedral; accompanying text read "Nothing is mandatory except dying and studying Swedish."

According to the Finnish constitution, Finnish and Swedish are Finland's national languages. In addition to studying Swedish as a mandatory school subject, all university graduates must demonstrate a certain level of proficiency, known as "public servant's Swedish." The requirement to study Swedish is often derogatorily referred to as 'pakkoruotsi' ("enforced Swedish"), since 92 percent of Finnish citizens are native Finnish speakers, while only 5.5 percent of the population speak Swedish. Speakers of Swedish are mostly concentrated in the coastal area. The public campaign against mandatory Swedish is embodied in a logo, in which the Swedish letter Å is tossed into the garbage. "Away with mandatory Swedish". A campaign logo against mandatory Swedish. The character on the logo throws away an Å, a letter found in Swedish words, but not in native Finnish.
© Wikipedia / Pois Pakkoruotsi - kampanja

Brotherly Love? Finnish TV Channel Tells Viewers 'Sweden is S*it'
Russian, however, has no official status in Finland, despite being the country's third largest language with over 70,000 speakers. It was recognized as one of the three official languages in the Grand Duchy of Finland, which was part of the Russian Empire until the 1917 October Revolution. Today, many Finnish websites, including national broadcaster Yle, run pages in Russian.

Neighboring Sweden, meanwhile, prides itself in English fluency; a study conducted by the language education company English First found that Sweden ranked among the top three countries in terms of English-language proficiency for five straight years among 60 countries surveyed.