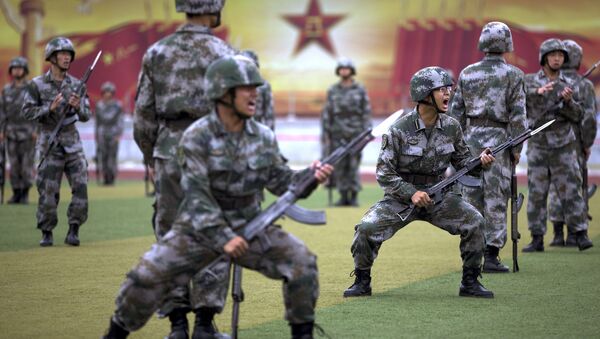 Chinese troops stationed along the border with North Korea have been placed on high alert, according to Japanese daily newspaper Yomiuri Shimbun.

The People's Liberation Army has three stages of alertness, and this is the middle stage. Beijing activates it when a "direct military threat" is detected. Soldiers are prepared for combat and are forbidden from taking leave.

The order came down in mid-April, and China has moved 150,000 soldiers to guard the border – or to potentially invade the Hermit Kingdom themselves, if they feel the need. Sim Tack, a North Korea expert with geopolitical analysis firm Stratfor, called the Chinese movements an attempt to minimize American involvement on the peninsula.

"The overt presence of Chinese forces would dissuade the US from going into that territory because they would run the risk of inviting that larger conflict themselves," Tack told Business Insider, adding that China could enter North Korea to place themselves "in a position to force a coup or force Kim's hand [in disarming his missiles]."

China's ultimate goal would be to "make sure North Korea still exists and serves Chinese interests while it stops acting as a massive bullseye to the US."

The Global Times, China's state-run media outlet, wrote that Beijing would consider a military response to an American surgical strike against North Korean nuclear facilities to be "unnecessary." The relationship between the once-staunch allies has soured in recent months, with Beijing threatening "serious consequences" to Pyongyang if they belligerently launch missiles.

"The game of chicken between Washington and Pyongyang has come to a breaking point," the Global Times op-ed reads. "It is more likely than ever that the situation will cross the point of no return. All stakeholders will bear the consequences, with Pyongyang sure to suffer the greatest losses."

However, the same Global Times piece said that an American or South Korean invasion of the DPRK would be another story entirely and would prompt Chinese military action.