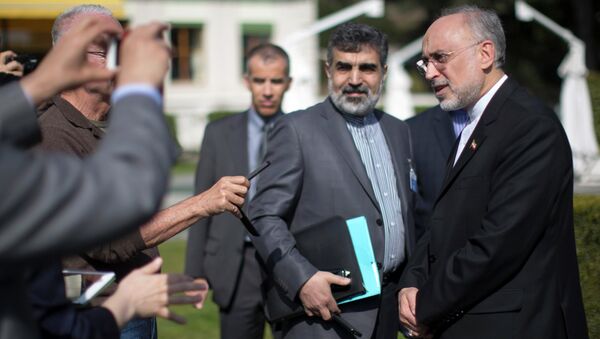 US 'Walking on the Razor's Edge' as Uncertainty Over Ties With Iran Looms
MOSCOW (Sputnik) – Last week, US President Donald Trump said that Iran was not complying with the JCPOA and would soon receive a response from the United States. He also directed a National Security Council-led interagency review of whether the Iranian nuclear deal befits US interests.

"The United States will be explicitly violating a nuclear deal with Iran and five other countries if it refuses to extend the suspension of American nuclear-related sanctions against the Islamic Republic on the due date," Salehi said, as quoted by the Fars news agency.

He also noted that Iran had achieved significant progress in the nuclear industry.

"If the nuclear industry maintains its current pace of progress, the country’s nuclear organization would attain budgetary self-reliance over the next five or six years," Salehi said.

In July 2015, Iran and the P5+1 countries — the United States, Russia, China, France and the United Kingdom plus Germany – signed an agreement ensuring the peaceful nature of the Iranian nuclear program in return for the gradual lifting of sanctions against Tehran. The deal came into force on January 16, 2016, after the International Atomic Energy Agency (IAEA) confirmed that Iran was ready to implement the program to reduce its nuclear potential.

However, the United States imposed new sanctions against Iran in February 2017 after Tehran carried out a medium-range ballistic missile test in late January.