UK Hunger on the Rise, More People Than Ever Need Emergency Food 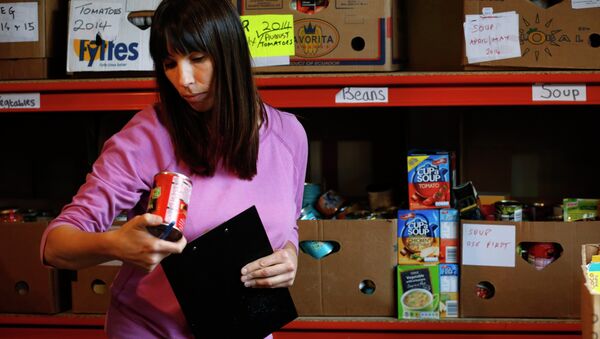 Poverty in the UK is growing, with a record number of almost 1.2 million food supplies being given out at food banks in 2016.

Figures for the 2016 financial year, released by London charity Trussell Trust, have shown that food banks have had to provide 1,182,954 three-day food supplies to people living in poverty. This is an increase of over 70,000 from 2015 numbers.

In addition to this, the charity declared that almost 440,000 supplies went to children. Campaigners have claimed the changes in the welfare system as the main reason to why this need for emergency food has grown.

Figures also show that since the UK government introduced Universal Credit (UC), a single monthly payment for people in or out of work, the number of people needing emergency food has increased by 17 percent.

The reason why UC has had such an impact on people using food banks has come down to the simple fact that there is a six-week waiting period for the first UC payment, which is causing people to go hungry, and develop debt arrears.

"The move to simplify an often complex welfare system is a welcome one, but any large reform can have unforeseen consequences," Mr. McAuley said.

"We are sharing our early observations with the Department for Work and Pensions to ensure any adverse side-effects Universal Credit can have on people are addressed before full rollout is completed," he added.

People Power Encouraging UK Supermarkets to Give Away Food for the Hungry
Experts claim, that food banks are the first places to experience the fallout caused by a welfare system under reform.

"We have been heartened by Secretary of State Damian Green's willingness to engage, his department's work to pilot improvements, and the recent changes to the Universal Credit taper rate which mean people moving into work will keep more of their earnings," Mr. McAuley said.

"We hope our insights can inform efforts to make sure the values on which Universal Credit is built are delivered in practice. To stop UK hunger, we must make sure the welfare system really does work for everyone," Mr. McAuley added.

One example of someone driven to using food banks is of an engineer who was made redundant after 37 years. In a recent interview, in which he preferred to remain anonymous, the man said that at the age of 52 he struggled to find work and as a result applied for UC. He was told that he would have to wait for at least eight weeks before he received any money.

"Without the food bank, I honestly don't know where I'd be. I was living on nothing during that period. It's hard, especially when you're been working for so long, and I did get very depressed and distressed. The people at the food bank pulled me out of the mire," the man said.

The Trussell Trust has more than 420 food banks, with people having an average of two referrals in the past year.

A Department for Work and Pensions spokesman said that the reasons for the increase in food bank use are complex, so it's misleading to link them to any one issue.

Debbie Abrahams, shadow work and pensions secretary, said that this is just another example of the Conservative party's economic failure.