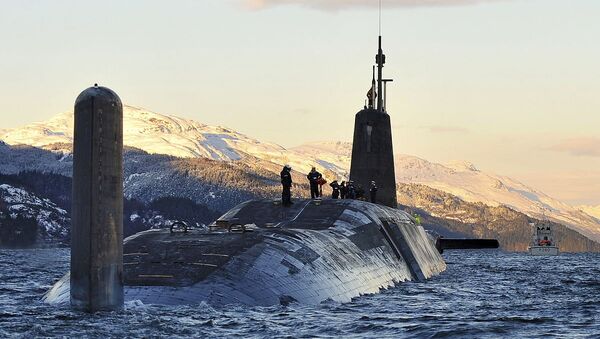 © Photo : CPOA(Phot) Tam McDonald
Subscribe
British Defense Secretary Michael Fallon recently confirmed that his Prime Minister Theresa May is prepared to use nuclear weapons in a first strike attack in "the most extreme circumstances." Commenting on the remark, Russian parliamentarian Frants Klintsevich warned of the devastating consequences of such an action.

More Than 50% of Brits Back PM, Would Launch Nuclear Attack If Need Be - YouGov
On Monday, British Defense Secretary Michael Fallon confirmed that his Prime Minister Theresa May "is prepared to launch Trident in the most extreme circumstances", as a first strike attack, even if Britain itself was not under nuclear attack.

The comments came during an interview with Britain's "Today" program on BBC Radio Four.

"In the most extreme circumstances we have made it very clear that you can’t rule out the use of nuclear weapons as a first strike," the UK's defense chief said.

When asked in what circumstances, he replied: "They are better not specified or described, which would only give comfort to our enemies and make the deterrent less credible."

"The whole point about the deterrent is that you have got to leave uncertainty in the mind of anyone who might be thinking of using weapons against this country," Michael Fallon added.

The comments apparently come in response to the remarks of Labour leader Jeremy Corbyn who signaled he would not launch attacks and could scrap the Trident deterrent.

UK Backing of Trump Bombardment: 'Policy of Double Standards'
Trident is the UK’s nuclear missile system designed as a deterrent to stop foreign powers attacking Britain and its allies.

The name refers to the missiles which are carried by four Vanguard class submarines, which have up to eight nuclear warheads each.

Commenting on the remarks, Russian parliamentarian Frants Klintsevich, first deputy chairman of the defense committee in Russia’s upper house of parliament, the Federation Council, said that it "deserves a tough answer", and that he is not afraid to "overdo it."

"At best, Fallon’s threat should be viewed as a type of 'psychological warfare,' which in this context is an especially disgusting menace. Otherwise, this looks particularly bad as the question naturally arises: who is it that the UK is ready to preemptively use nuclear weapons against?" reads Klintsevich’s comment on his Facebook page.

"If Britain attacks a nuclear power, it will be "literally wiped off the face of the earth by a responsive strike given its not-too-vast territory," the post further reads.

"However, if it is against a non-nuclear power, the UK seems to be after the US' 'laurels' which dropped down nuclear bombs on the defenseless [Japanese cities] of Hiroshima and Nagasaki [in 1945]," he added.

UK Defense Secretary to Face Parliament Over 2016 Trident Missile Misfire
In a separate comment on the issue, Alexei Leonkov, a military expert and commercial director of "Arsenal of the Fatherland" magazine also suggested that the UK is following Washington's example.

Earlier in April, the NBC News channel reported, citing "multiple senior US intelligence officials" that "the US is prepared to launch a preemptive strike with conventional weapons against North Korea should officials become convinced that North Korea is about to follow through with a nuclear weapons test."

"Every country has its "list of threats" after which nuclear weapons should be applied irrevocably. With regards to a preemptive strike, only two countries have recently claimed that they are ready to use it for such a purpose, it is the US and North Korea," Leonkov told Radio Sputnik.

He further explained that now the UK has joined the two. London might soon voice its "list of threats" on which it will use its nuclear weapons, but before voicing it to the world, it should be agreed upon in parliament as the country's nuclear doctrine.