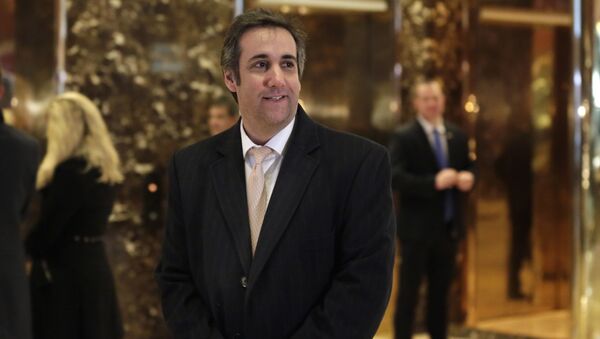 Cassandra Fairbanks
All materials
The personal attorney for US President Donald Trump has begun investigating possible legal actions over the infamous and discredited “golden showers” dossier, which was recklessly published by BuzzFeed.

BuzzFeed Trolled by Russian Tech Exec in Dossier Lawsuit Filing
Michael Cohen, Trump’s lawyer, is considering a lawsuit against both BuzzFeed and the British spy behind the dossier, Christopher Steele.

The report claims that Cohen met in Prague with Russian officials who were involved in the hacking of the Democratic National Committee, which the attorney immediately refuted after the dossier was published. Cohen maintains that he has never been to Prague, and posted a photo of his passport in the tweet saying so.

Cohen says he was in Southern California at the time that Steele claimed he had travelled to the Czech capital, and reportedly shared his itinerary with aides.

Both BuzzFeed and Steele, a former UK intelligence member at MI6, are already being sued by tech entrepreneur Aleksej Gubarev, the CEO of XBT, who was also named in the dossier.

“I believe the entire dossier to be inaccurate, and worse, completely fabricated. I applaud Aleksej Gubarev in bringing legal action against both Christopher Steele and BuzzFeed for creating and disseminating this fake dossier/information without a scintilla of fact checking. I am currently in discussions with foreign and domestic counsel to file similar actions,” Cohen told the Washington Times.

BuzzFeed has since apologised to Gubarev, and redacted his name from their published copy of the dossier – but he maintains that the damage done is irreversible.

The dossier claims that Gubarev was coerced into assisting in hacking the Democratic Party by Russian spies who had compromising information on him, and that the tech entrepreneur ultimately played an “instrumental” role in the emails being released by WikiLeaks.

World
Trump Dossier: 'I'd Really Like to Find Out Why My Name is in This Report'

Steele, through Washington-based firm Fusion GPS, was originally hired by “political opponents” within the Democratic and Republican parties to investigate Trump, but it has not been revealed exactly who hired him. According to a report from the Independent, anti-Trump Senator John McCain had sent an intermediary to London in November to collect the dossier, which was then personally passed to FBI Director James Comey.

The allegations in the report have been dismissed by both Trump, who has referred to Steele as a “failed spy,” and by Russian President Vladimir Putin. Even BuzzFeed, which initially published the bizarre information, noted discrepancies, acknowledging that none of the allegations could be confirmed.

The most salacious claim in the dossier is that there was a video of a urine party hosted by Trump and secretly filmed by Russian intelligence agencies, although there is no evidence to support the allegation that any such recording exists. The bizarre report claims that the president had hired prostitutes to urinate on a bed that was once slept on by the Obamas.

Last month, former advisor to Democratic presidential candidate Hillary Clinton and former acting CIA Director Michael Morell asserted that he does not believe that Trump colluded with Russia, and that the dossier is bogus.

"Unless you know the sources, and unless you know how a particular source acquired a particular piece of information, you can't judge the information — you just can't,” Morell explained at an event sponsored by the Cipher Brief, a global security analysis platform. "I had two questions when I first read it. One was, ‘How did Chris talk to these sources?’ I have subsequently learned that he used intermediaries.”

Morell also revealed that Steele had paid people to give him information, sullying the credibility of the dossier entirely.

"And then I asked myself, ‘Why did these guys provide this information, what was their motivation?’ And I subsequently learned that he paid them. That the intermediaries paid the sources and the intermediaries got the money from Chris,” Morell stated. “And that kind of worries me a little bit because if you're paying somebody, particularly former FSB officers, they are going to tell you truth and innuendo and rumor, and they're going to call you up and say, 'Hey, let's have another meeting, I have more information for you,' because they want to get paid some more.”